Here, are 5 free Android map apps. These mapping apps for your Android smartphone make it very easy to find route to any location. Now you don’t need to carry a separate GPS device; your smartphone doubles up as that.

Google Play Store has multiple map apps to install on Android. From among all of them below are the 5 free map apps that helps you navigate locations on Android. Map apps include Google Maps; one of the most popular official Google app, Map (-) app, National Geographic World Map app, and more. 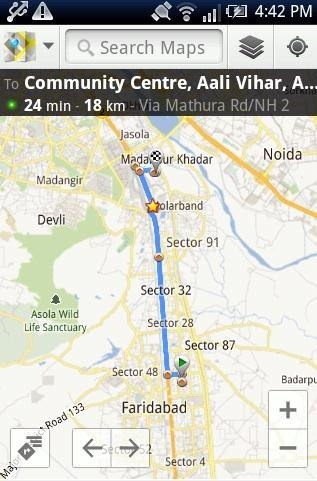 Google Maps is a free Android map app that provides the option to navigate world map on Android. Google Maps app is the official Android app from Google. Also, Google Maps is one of the most popular app in Google Play Store that most of the Android users install on their Android phone. You can easily search for any location on Google Map. The new feature added by Google in Android Google Map is the navigation part. You can navigate the route from one place or location to other location on Google Map. The tells you the complete route by highlighting the way on Google Map with a different colored line. You can easily reach any location with your own vehicle by following the way displayed on Google Map on your Android phone. You can also view the app map according to different layers which include traffic, satellite, terrain, transit lines, and more. The Google Map uses your phone GPS to accurately track your location. 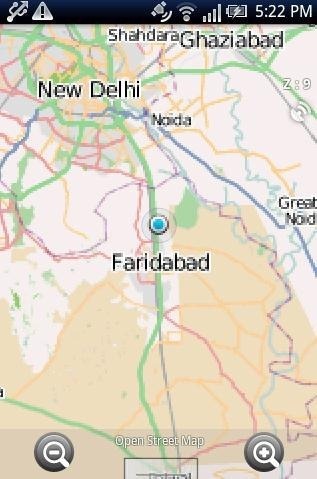 Maps (-) is a another free Android app that offers world map on Android. You can easily browse between different countries, states, and cities on the map. Maps app allows you to browse location on three different maps which include open street map, open cycle map, and Google Map. You can also activate your phone’s GPS to trace the current location on any of the three maps. Zoom in and zoom out to check the location on the map in better way. The map even allows you to load GPX data from SD card, if any. If you want to zoom in the map location, then magnify map to zoom in the location searched. Toggle the map to full screen mode for the better view of navigation of countries, states, and cities on Map app for Android. 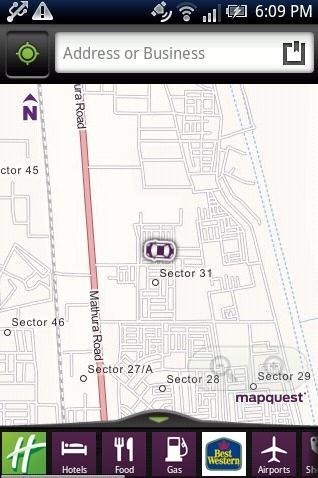 MapQuest is a free Android app to display map and navigate the location on Android. You can easily search for any location on MapQuest. The map provided by MapQuest looks same as Google Map on Android. You can also browse hotels, restaurants, cars, Airports, shopping places, and coffee shops. The app even allows you to navigate and search routes between two specific locations. Like Google Maps app and Map (-) app, you can toggle MapQuest to full screen mode view. MapQuest provides GPS shortcut key to enable/disable GPS on your Android phone. Switch to multiple map views which include traffic, satellite, and night mode. Zoom in and zoom out the world map to see the searched location and nearby location on Android phone. 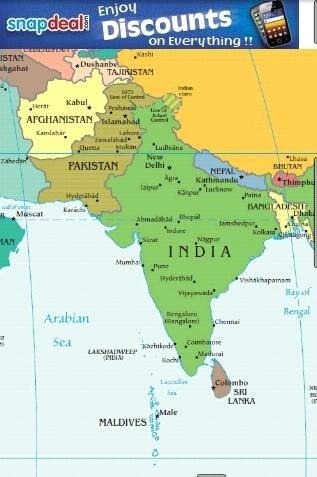 World Map 2012 is a free Android map app that provides world map with a very simple view. This Android world map app is the best app for students studying geography subject. The view of the map looks as it is designed specially for students. The good part of the app is that, the map works offline on Android. Just launch the app and you will find full globe shaped world map. No extra settings required. Just launch the app and browse the location by scrolling the map. You can zoom in and zoom out the world map to view the locations in a better way. If you want any online world map app, then read the next review on National Geographic World Map app. 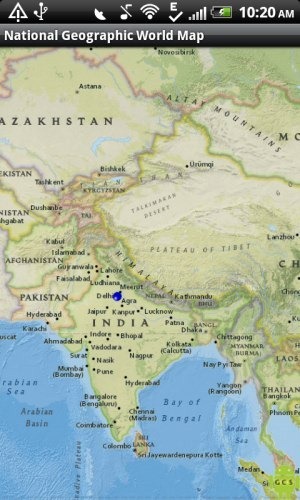 National Geographic World Map is a free Android map app that works when you are online. The app displays map in the form of Globe. Displaying map with National Geographic World Map look same as with World Map 2012 app. You just have to launch the app and start browsing the locations on World Map. You can zoom in and zoom out the map to see the details with a better view. The more you zoom the map, the more will the app display the location information on Android. No need of GPS. You just need a simple internet connection and get started with the app.

If you find any other good Android Map app, then do let us know in comments below.

You can check out Location Tracker App for Android. We have also reviewed an article to track location on Android with Life360 app.