Hola is a free internet accelerator that can speed up internet connection. It will make everything load faster, with a factor of 3x to 10x. It is a completely free software, with no ads or sign-ups required. It also unblocks websites like Hulu, Netflix, Pandora etc. so that they can be viewed from any country.

Hola is quite an awesome software actually. It does speeds up your internet. If you are already on a fast network, you can still install Hola and experience even better speeds.

The company that has created Hola has setup a goal to make internet 10 times faster. Quite an ambitious goal, but they do seem to have some sharp minds working on making this happen.

Let me take a moment to explain how Hola works. Hola is a P2P based accelerator. It relies on other computers who are using Hola to speed up your internet browsing speed. How does it do that? It does that by basically two methods:

1. Caching: Hola maintains a cache of the content that you have viewed. If you view the same content again, it will be able to get that from cache, instead of loading the web page all over again. This would, obviously, be much faster. Also, if some other friend of you nearby tries to view the same content, Hola will be able to pull it from your cache and send to your nearby friend. So, instead of your web requests all around the globe to fetch the page content, you will be able to pull the content from the cache saved on nearby computer on Hola network. In addition, the cache is stored and transmitted in a compressed form, which reduces the size of data that is transmitted.

2. Multiple Parallel Connections: Another thing that Hola does to speed up the internet is that it creates multiple parallel connections for the content that you are trying to view. This is especially helpful for videos. Let’s say you are trying to view a YouTube video. If the video has already been viewed by someone on Hola network nearby, then Hola would be able to pull cache from that computer to serve you. However, in case the video is not in cache yet, then Hola will download parts of that video on other computers near you, will compress those parts, and will send to your computer. So, your computer won’t just receive video from YouTube, but it will also receive parts of that from other computers, thereby increasing the browsing speed and reducing the time taken to buffer the video.

See the video below that shows side-by-side test done by Hola team to see how internet speed increases by using Hola internet accelerator:

Apart from these, Hola use some other technologies as well, like, compressing communication, DNS acceleration, etc. You can see more details around Hola on this FAQ page. This page also answers questions around privacy, etc.

Of course, Hola is not the only one in this space. Other software like Ashampoo Internet Accelerator, and Speedbit Youtube accelerator can also increase internet speed. However, the P2P technology that Hola uses is what separates Hola from others to offer much better internet acceleration.

How to Use Hola to Increase Internet Speed:

Hola is quite easy to use. Just download and install this free software. Download size is less than 9 MB. Install the downloaded file. Once installed, Hola will stay in system tray. Just hover over the system tray icon to get various stats, like, whether acceleration is enabled and which wifi are you connected to. 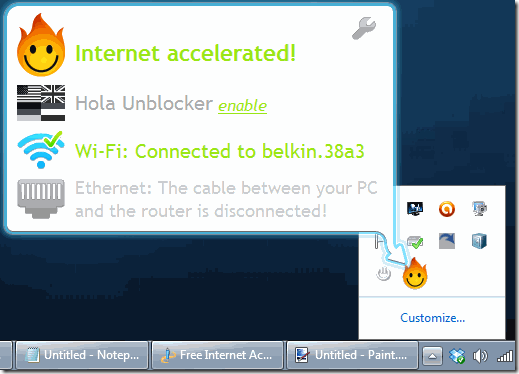 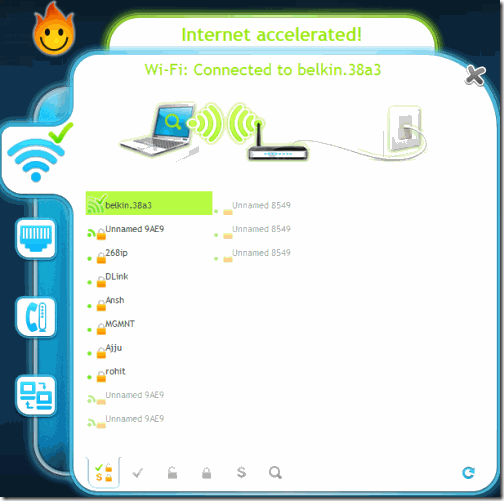 The interface above is basically a wifi manager. It shows various wifi networks around you and you can quickly connect to any network of your choice. In fact, Hola even makes it faster to connect to your wifi.

In case you don’t want that, you can choose to disable the acceleration.

Do note that Hola will use your computer as a peer for speeding up others’ connections only when you are not using your computer.

Hola comes with an unblocker feature that unblocks websites like Hulu, Netflix, Pandora, and many more in all the countries around the globe. To do that, just go to Hola’s tray icon and click on Hola Unblocker Enable. This will unlock those websites for you. 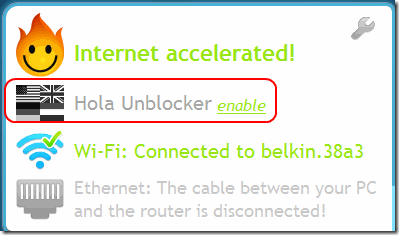 How Does Hola Makes Money:

Hola is completely free. It does not show any ads, neither it has a paid plan. So, how does it makes money. I have no clue. However, one thing is for sure that Hola intends to make a lot of money. Its “About” page mentions that it wants to become a multi-billion dollar and has already got investments of $18 Million from investors. So, how would Hola make money? Here are my guesses around it:

1. CDN: Hola can easily use their technology to become a big CDN provider. Unlike other CDNs, Hola would be based on P2P model and won’t have to invest in creating huge server farms. So, they can offer very cheap CDN services and make lot of money from it.

2. Tie-Up with Content Providers: Let’s think about who would be the biggest beneficiaries of Hola. Apart from us as the users, it would benefit most the streaming video providers, like, YouTube and Netflix. One of the biggest expense of these companies is bandwidth. What Hola does is that it effectively reduces their bandwidth consumption by serving content from caches on peered computers, thus saving tons of money for these companies. So, these companies shouldn’t mind sharing a pie of those savings with Hola.

3. Planning to get Sold: It could also be possible that Hola wants to grow a lot and just wants to be sold after that. Who would buy Hola? A whole lot of companies, like YouTube, Netflix, etc. The potential is enormous.

Because Hola has been able to secure such a huge funding, they obviously would have a strong business model in place which they might unveil sometime down the line. Of course, that means for us that Hola will survive for a long time and will remain free.

Without a doubt, Hola is a great software. It has been carefully thought of, and well executed. It is still at an early stage and it crashed for me a few times during my testing. But, these problems should iron out over the time. I installed this internet accelerator for my testing, but I am going to leave it there to experience a faster internet in general, and faster video buffering in particular. Long live Hola.