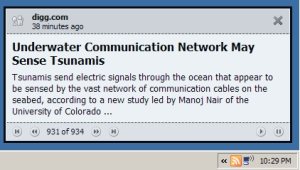 I had reviewed a similar software earlier called Google Reader notifier that works with your Google Reader. But I realized that usefulness of that software was limited, as I do not want to be necessarily alerted by new items in all my subscribed feeds. This is where this Feed Notifier comes handy.

If you are already using a feed reader, but want to get real time alerts for some of the feeds only, then Feed Notifier is perfect. You can subscribe to the feeds that are more important to you, and Feed Notifier will keep checking them.

Feed Notifier comes with many configuration options. You can change the look of alerts by using themes. You can also control the interval at which Feed Notifier checks for new items. In fact, you can set a different polling time for each feed. So, you can configure Feed Notifier to check one feed every 10 minutes, but check another feed every hour.

Feed Notifier has been well designed, and many small things have also been taken care of, which could otherwise become hindrance. For example, when the pop up for new feed item comes up, it does not takes away focus from your keyboard and mouse, so you can keep doing what you are doing. Apart from that, you can configure size and position of pop-up. The Feed Notifier pop-up itself comes with navigation controls to move to previous items that you might have missed.

Also check out Growl for Windows and Email Notifier.