SmartSniff is a simple to use yet versatile network monitoring software that lets you find detailed information about TCP-IP packets passing through network adapter. Incredibly lightweight and intuitive, SmartSniff captures the TCP-IP packets as they pass through the network adapter interface, and displays the captured data as a sequence of conversation between clients and servers. Based on the type of protocol, it can show display these conversations either in ASCII mode (for text based protocols such as HTTP, FTP etc.), or as a hex dump (for non-text based protocols such as DNS). SmartSniff can capture TCP-IP packets either via the raw sockets method, or after installing specific packet capture drivers (e.g. WinPcap or Microsoft Network Monitor). For each of the connected local host, it can display columnar information such as local and remote addresses, ports, data size etc. It can even generate an HTML report of the captured statistics.

How To Use SmartSniff To Find Detailed Information About TCP-IP Packets Passing Through Network Adapter?

SmartSniff is available as a standalone portable application and at an incredibly measly 80 KB in size, makes even terms like “ultra-lightweight” seem too much. As is the case with pretty much every portable application, you know what to do after downloading. Here’s how SmartSniff looks like: 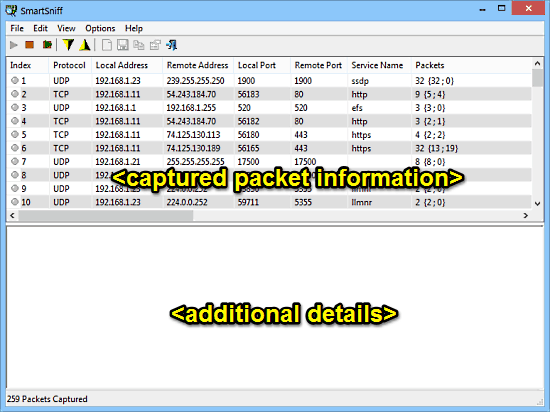 As its minuscule size pretty much gives away, SmartSniff features an extremely basic single window user interface. The UI is divided into two horizontal panes. The upper pane displays the captured packets in addition to a whole lot of information about them in individual columns. On the other hand, the lower pane displays the detailed TCP-IP conversations (ASCII mode or Hex dump according to the protocol) about the item selected on the top. Apart from that, there’s just a simple menu bar and an icon based options bar up top. Like I said, quite basic!

Using SmartSniff to find detailed information about the TCP-IP packets passing through network adapter is extremely simple. Essentially, you don’t have to do anything, as the whole thing is pretty much automated. Here’s how to get it done:

Step 1: Fire up the application, and select File > Start Capture from the menu. When run for the first time, the program will ask to select the capture method (Raw Sockets, WinPcap driver etc.) and the Network Adapter. After making the selections, hit the OK button. Check out the screenshot below: 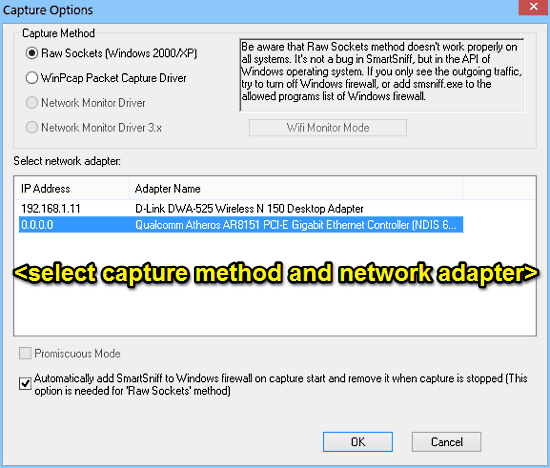 Step 2: That’s pretty much it. Once the capture method and network adapter have been specified, SmartSniff will immediately get to work and instantly start capturing TCP-IP packets passing through the network adapter in real time. It displays a multitude of information about the connected hosts, such as local and remote addresses, service name, and things like that. All you have to do is select an item from the top pane, and its detailed captured TCP-IP conversations will be displayed in the bottom pane. Not so hard, right? 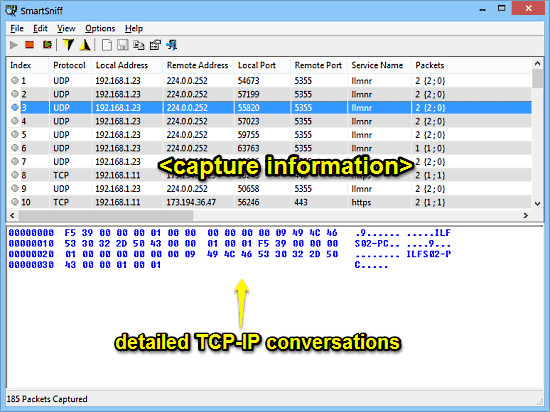 If you want a detailed HTML report of TCP-IP capture streams, you can easily do so via the View > HTML Report menu option.

SmartSniff is a powerful network monitoring software that lets you find detailed information about TCP-IP packets passing through network adapter. It’s extremely lightweight and at the same time, surprisingly feature loaded. Features like portability, detailed HTML reports and compatibility with major capture drivers make it even better. Do give it a try, you’ll love it.