This tutorial explains how to open command prompt from any folder in Windows 10. Being the newest and arguably the most radically re-worked version of Windows so far, Windows 10 is not only filled with a whole bunch of new features, but also includes general enhancements to some of the staple Windows features, such as the good ol’ command prompt.

The command prompt is still the weapon of choice for hardcore geeks (and even some casual users) when it comes to manipulating files and folders. But I’m sure everyone will agree, navigating to a  particular directory (especially if it’s deeply nested one) using the command prompt is a massive chore.

How To Open Command Prompt From Any Folder In Windows 10?

Here’s how to do it:

Step 1: Launch Windows Explorer (if it’s not already open), and navigate to the folder where you want to open the command prompt. 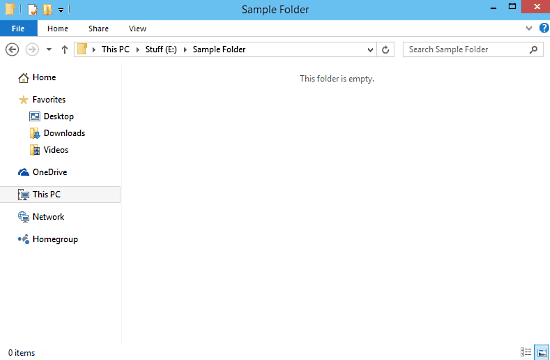 Step 2: Once there, click on the File menu, and a drop down menu should appear. Click on the Open command prompt option, and you’ll see two options: one for launching the command prompt regularly, and another one with administrator privileges. Simply click on the option of your choice. Here’s a screenshot: 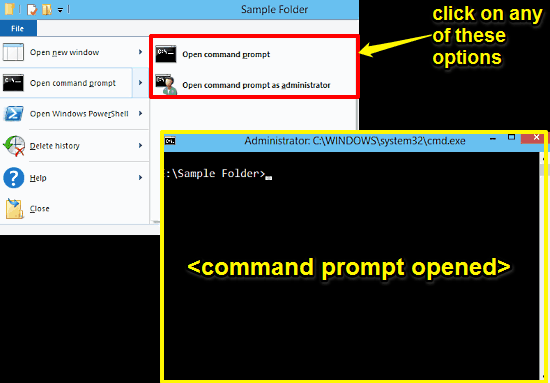 That’s it! As soon as you click on one of the two options, Windows 10 will launch a brand new command prompt window (in standard or administrator mode, as per the option selected by you), already pointing to the current folder. Isn’t that great?

Apart from the above mentioned method, there are two other methods to open command prompt from any folder as well. However, these can only be used to open standard command prompt instances, and not with administrator rights.

Anyways, here they are:

Alternate Method 1: Right click on the folder where you want to open the command prompt while keeping the Shift key pressed. From the context menu that appears, click on the Open command window here option.

Alternate Method 2: Navigate to the folder where you want to have the command prompt launched. Once there, simply type cmd in the address bar, and hit Enter.

The ability to open up a command prompt window from just about any folder in Windows 10 is a pretty handy feature. Simple and useful, it can save quite some time when it comes to navigating nested folders using the command prompt. Give it a try, and let me know what you think in the comments below.