CodeMonkey is a really interesting free website for kids to learn programming the fun way. An absolute joy to use, CodeMonkey has been designed from the ground up to make learning the basics of programming easy. Essentially, CodeMonkey is a game where the player has one objective: help a monkey reach his bananas. The game consists of a total of 30 progressively difficult challenges. These challenges are designed to teach basic programming skills to students (move “A” units in any direction, turn by “B” degrees, move backwards by “C” units etc.). Each challenge ends when the monkey gets bananas.

CodeMonkey features live code, which means you can instantly type in the code and hit Run to see its result. You can also create a free account to automatically save your game progress. Sure as hell sounds fun, doesn’t it? Let’s find out more.

Since CodeMonkey has been designed as a game to be used primarily for teaching (or more specifically, introducing) the basics of programming methodologies (you’re not expecting to learn C or Java through bananas, are you?) to students, its user interface is super simple as well. Here’s how it looks like: 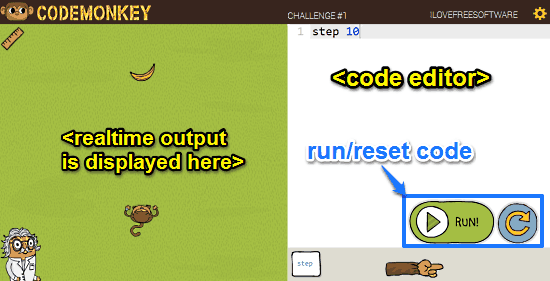 As illustrated by the above screenshot, CodeMonkey’s interface looks just like an online game (which makes all kinds of sense, considering that’s what it is!). It’s primarily divided into two vertical panes. The left pane is where your monkey and his banana are. A ruler tool sits on the top left corner to help your monkey measure the distances (explained later), whereas the bottom left corner shows up your animated programming tutor (There are a bunch of them, named after legendary figures of computer science) to guide you through the challenges. The right pane is the code editor, complete with line numbers and syntax highlighting. This is where you type your code to help the monkey get the banana(s). Apart from that, there are two buttons: a Run button to execute the lines of code written (and thus move the monkey on the left), and a Reset button to clear out any code you’ve written. Pretty simple stuff!

How To Use This Free Website To Learn Programming The Fun Way?

Note: Although CodeMonkey can be played without an account just fine, creating a free account automatically saves your game progress, letting you pick up from where you left the last time.

Using (or Playing) CodeMonkey to learn the fundamentals of programming methodologies is super simple and fun, just like a game should be. Here’s a little step by step tutorial, illustrating how to get started with CodeMonkey:

Step 1: Hit the play button on CodeMonkey’s homepage to load up the first level. Your animated tutor will guide you about how to play the game. The basic gameplay involves typing some commands, and then hitting the Run button to see their effect on the left. For example, in the first level, the first line of code is step 10. When you press the Run button, this line of code will cause the monkey on the left to move forward 10 steps. If 10 steps aren’t enough to reach the banana, the game will prompt you to try with a bigger number (e.g. 15). Check out the screenshot: 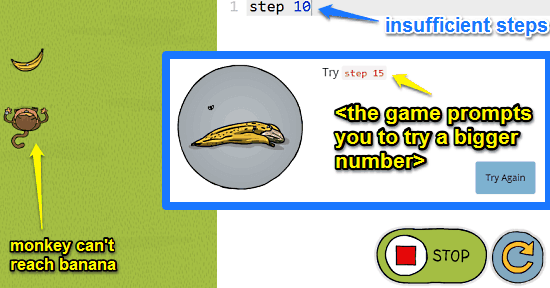 Step 2: When you edit the code with the bigger number (15, in this case), the monkey is able to successfully reach the banana, thus completing the challenge. An animated pop-up featuring a jumping monkey notifies you of your feat, and the game progresses to the next challenge. 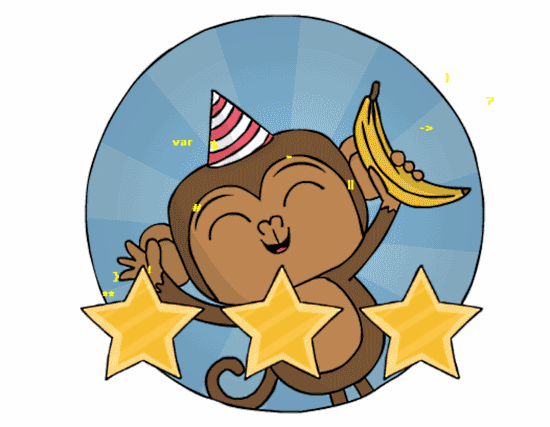 That’s all there’s to it, folks! All you have to move from one level to the next is use these kind of simple programming code lines to get your monkey get his bananas. As you keep on progressing to more difficult levels, the game teaches you more interesting commands to move the monkey backwards, make him turn through a certain angle and things like that. It’s simple and fun. So what are you waiting for? Go and get that monkey some bananas!

CodeMonkey is an incredibly fun free website to learn programming the fun way. It is simple, and easy to use, and introduces students to the fundamentals of programming through a medium they love the most. While it can’t be used to learn proper programming languages like C, Java etc., but then, that’s not what it’s meant for. As far as making students love coding goes, CodeMonkey sure does deliver. Do give this a try, you’ll love it.