ClippyCam is a free iPhone picture in picture app to add video to another video. Using this app you will be able to record a video and then add another video at the top of the first video. Actually, what happens is when you record a video using this app, it will again ask you to take another video to add your message. After that, it puts a new layer at the top of the first video which you have recorded. You can then move the overlay video to any position you want and also resize it as required.

Apart from adding video to another video, it also allows you to add photo to another photo, add a photo to video, and add video to photo. It might sound crazy and confusing, but when you start using the app it will become very easy for you to understand the concept of this app.

Similar to other iPhone apps like Headswitch, Voice Swap, etc. this app also makes sharing videos with others more fun and interesting. The best part about this app is that you don’t have to write text anymore to tell your message, as you can simply put a video or a photo at the top your photos and videos.

Using This Picture in Picture App to Add Video to Another Video on iPhone:

After installing the ClippyCam app on your iPhone, open it up and you will see the built-in camera on the main screen. Now, to record a video simply press and hold the “Record” button at the bottom of the screen. Apart from recording new videos, you can also use the existing videos from your camera roll. 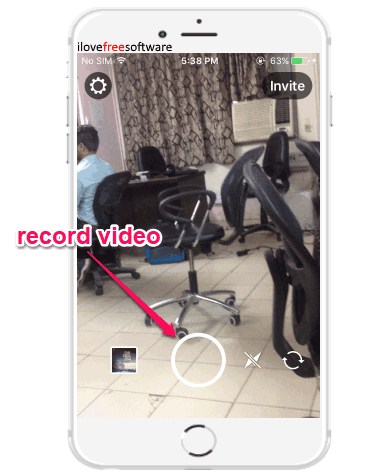 As soon as you’re done recording or importing a video, it will automatically place a new camera layer at the top of the video. Initially, the new overlay layer will have a small square frame, but you can resize it by pinch and zoom. Apart from that, you can also move it to any position you want, change the overlay video shape, and add a border to the overlay frame. 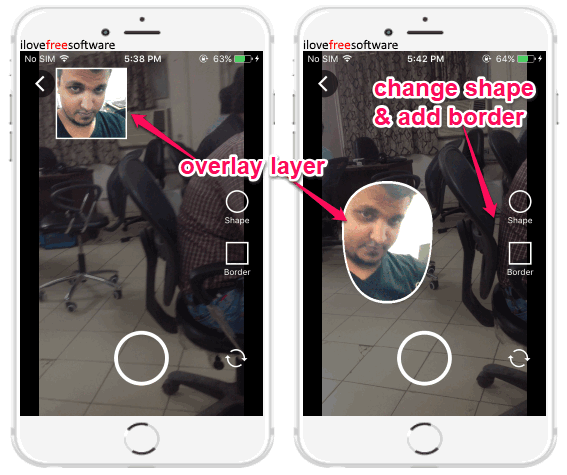 When you’re all set with the overlay layer settings, you can again press and hold the “Record” button to record and add a new video at the top the first video. After you record the overlay video, it will automatically process the video and you can either save it to your camera roll or share it directly via Snapchat, Instagram, Facebook, Twitter, etc. 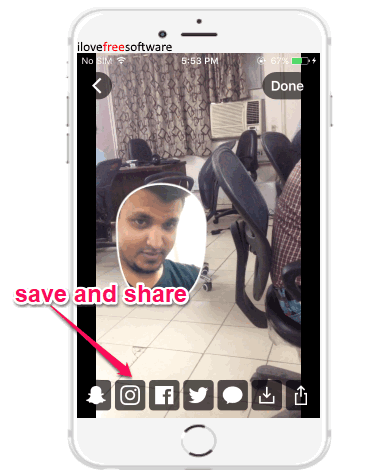 Now, whenever someone plays the video which you have created and shared using this app, he/she will be able to watch both the videos simultaneously, as shown in the very first screen capture.

ClippyCam is a very interesting app which makes sharing photos and video more fun. No more sharing videos and photos with text messages, as you can now express your message with the help of photos and videos at the top of one another. Give this app a try and you’ll love it for sure.