Sometimes you want to read a text which is in other language that you don’t understand and it becomes quite difficult to identify which language is that. That’s where these free software come in handy. These software can easily tell you about the phrase or a word’s language in just a few seconds.

So, let’s see more details about these free language identifier software for Windows.

Polyglot 3000 is one of the best free language identifier software for Windows. The software supports up to 400 different languages that it can identify by just typing a corresponding word. Along with the language name, it also tells you the accuracy of the result and the response time that it took to identify a language. It also supports the 119 prominent languages and 11 Cyrillic languages. All you have to do is just paste a word of a language or a phrase in it and then it will tell you which language is that. 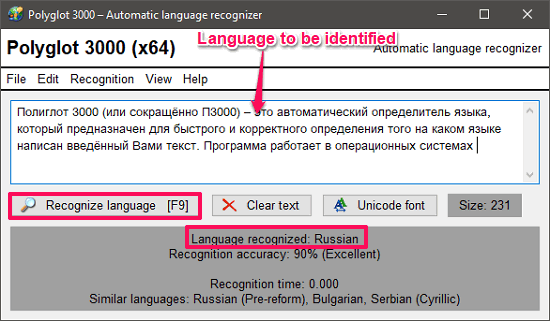 Getting started with Polyglot 3000 is very easy. Just download and install it using the above link and then run it. There is text box in between its interface where you have to paste the text or word from a language. After that, hit the Recognize Language button and then it will show you the result in the bottom pane of the software. The result that it shows includes the accuracy of the identification, similar languages, response time, and of course the actual language name. See the above screenshot.

Lextek Language Identifier is another free language identifier software for Windows. The software supports a lot of langues and you can easily use this software to identify a particular language. Currently, it supports 260 languages and you can identify a language by entering a text or a single word on its interface. If that language is available in it, it will tell you about that. 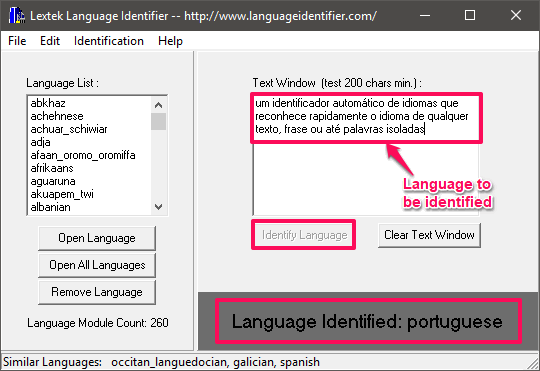 Using Lextek Language Identifier is very easy and it does not require internet connection to identify a language. So, grab its setup file from the link above, and then install it. After that, open it up and you will find its interface which has a text box on the right side, where you have to enter the text or a word. The software says the length of the text should be minimum 200 characters, but it also works for a shorter text. So, just enter the text and hit the Identify language button. After that, it will pull up the result for you and will place it at the bottom of the interface of the software. See the above screenshot.

Free Language Translator is actually a translator software, but it can also be used to identify a a particular language. The software has a feature to detect a language and also it allows you to translate it. Free Language Translator has dual pane view and at the left side of its interface, you can paste or enter the desired text that you want to identify. There are options to just detect the language, or you can choose to translate it to any other language. The software uses Google translate, but you can also use your custom dictionary to do the same. 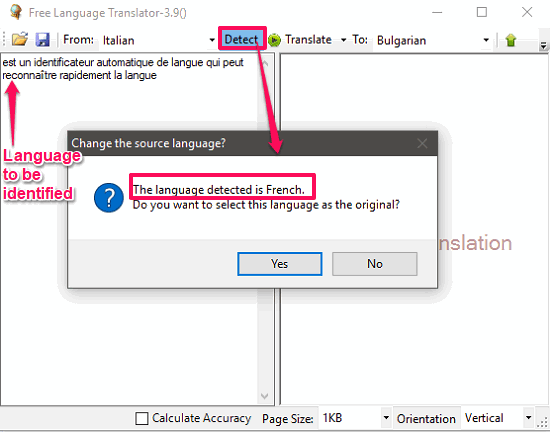 Getting started with Free Language Translator is very easy. Just download and install it on your PC using the above link. After that, open it and you will see its dual pane interface. Now, enter the text that you want to identify in the left pane. Next, hit the Detect button from its tool bar. It will show which language is that in a dialog box, and also ask you whether you want to make it input language to translate it. Additionally, you can use the translator part of the software to translate a desired language to another language of your choice.

Franc is a Command line language identifier software for Windows. The software is pretty handy to use. All it requires is Node.js to be installed on your PC. After installing, you can use it from any location of your PC with just a single command. The default installation of the Franc adds support for 186 languages. But, this can be further extended to 384 languages by installing the full package of the Franc (Franc-All). However, the software shows the name of the detected language as an acronym. So, you may find it difficult to get the correct name of the language. But, you can see the full list of the language names and their corresponding acronyms here that will help you.

Follow these simple steps to get started with Franc:

Step 1: Download the repository of Franc as a ZIP file using the above link. After that, extract it to some directory and open command window there.

Step 2: Now, run the following command. And once the progress completes, you can verify the installation of Franc by running “franc –help” command. 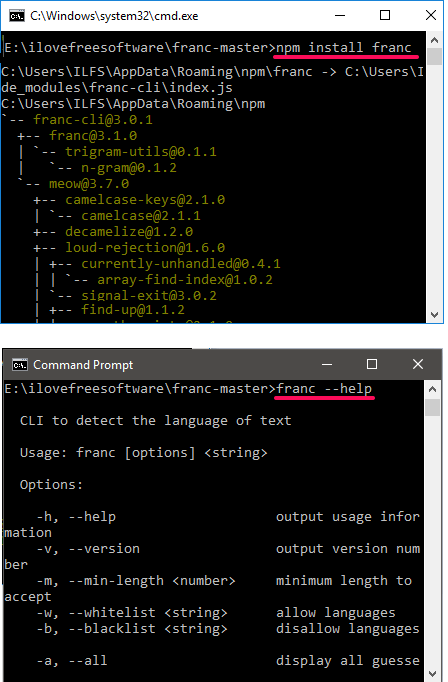 Step 3: To detect any language using it, type the command in the following syntax.

So, in this way you can easily identify most of the languages using Franc, And it gives you the accurate results in just a few seconds.

These were some very good language identifier software for Windows. All of these software can easily identify a language by a text or a single word. I have also added a language translator in the above list that can detect a language. Obviously, Polyglot 3000 would be the best pick from this as it is an outstanding language identifier with a lot of languages support. And if you want to have the translator functionality along with the language detection, then Free Language Translator is a good option.