This article talks about 5 best image viewer software for Windows 10. In the course of our day to day computer usage, we have to manage and deal with a diverse range of files types. These range from textual documents to audio tracks, and from system files to executable programs. However, one of the most common of these file types are images. Whether it’s your vacation photos, or some cool looking HD wallpapers; they’re essentially images. And just like any other digital file type, image file types are also innumerable, some of which are pretty obscure.

But don’t worry, as the image viewer software discussed here are there to help. These applications not only support a plethora of image file formats, but also include goodies like basic editing tweaks, shell integration, slideshows, and then some more. Psyched? Let’s find out more about 5 best image viewer software for Windows 10. 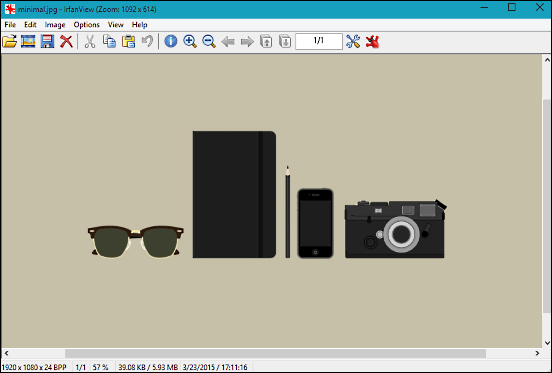 Fast, minimal, and insanely feature loaded, IrfanView is a powerful image viewer software for Windows 10. The program makes it incredibly easy to view all sorts of images stored on your computer, while consuming next to none system resources. IrfanView supports a truckload of popular (and not so popular) image formats, such PNG, GIF, FSH, HDR, DXF, PSP, VTF, XPM, ASF and SIF. In addition to that, it also lets you view RAW images captured using digital imaging devices from manufacturers like Canon. But that’s not all. IrfanView includes a number of other features as well, including batch conversion, file search, icon extraction, and screen capture. You can also enhance its functionalities via a wide range of plugins. Read more about it here. 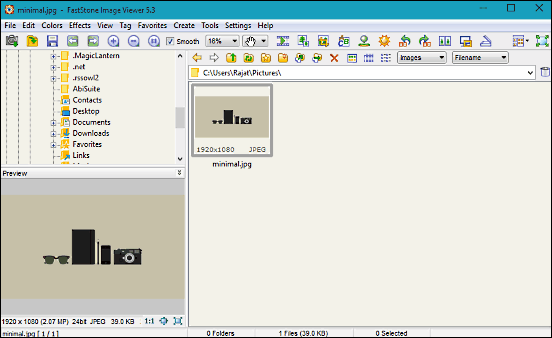 Want a feather light image viewer software for Windows 10 that doesn’t compromise on features? Look no further than FastStone Image Viewer. Overflowing with all sorts of goodies, FastStone supports a ton of image formats (view and save) such as WMF, TIFF, PCX, TGA, and even PDF. Apart from that, it can also open RAW image files from a whole bunch of digital camera manufacturers like Canon, Nikon, Pentax, Sony, and Panasonic. FastStone is also a pretty capable image editor, and you can use it to apply operations like resize/resample, color/curve adjustment, sepia, clone stamp, and much more to your images. It lets you compare up to four images side by side, which makes it easy to get rid of duplicates. Then there are goodies like skinning support, multi level undo/redo, slideshow with music, and things like that. Visit this link to find out more. 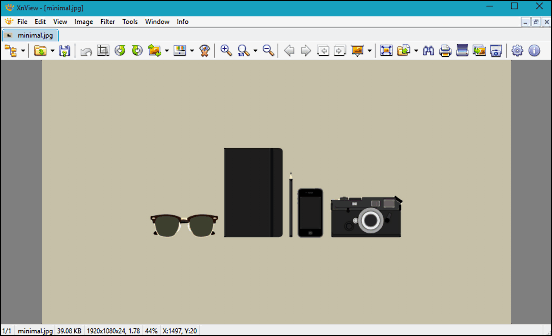 With support for viewing images in over a mammoth 500 formats, XnView is a beastly image viewer software for Windows 10. Apart from the regular bunch of image formats (PNG, GIF etc.), this thing supports even the most obscure of image formats, such as AWD, PTG, A64, IBG, BRK, BIG, CAM, ERI, ENC, and LFF. And that’s just the tip of the iceberg. XnView even lets you view RAW image formats from the devices of manufacturers like Canon, Nikon, and Pentax. The application also includes a healthy bunch of image editing goodness, and you can apply tweaks like auto brightness/contrast levels, lossless rotate, filters, and more. There are multiple viewing modes (filmstrip, slideshow with FX), and you can choose anyone you like to view all your images. XnView has a simplistic UI, and it even lets you manage and organize your image collection. Find out more here. 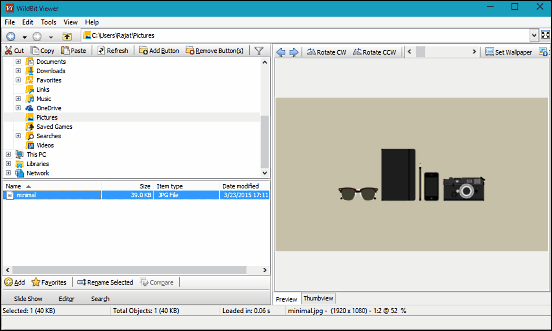 It may not be as feature loaded as the just discussed XnView, but WildBit Viewer packs in enough goodness to hold its own against the competition. It’s a capable image viewer software for Windows 10 that supports a number of formats such as TGA, PCX, G3N, WBMP, and VDA. Apart from that, WildBit can also display RAW images from all major digital camera makers. The application has an easy to use interface, and the directory view with instant previews makes navigating to your favorite images and viewing them a breeze. In addition, there are also features like EXIF support, info generation from CSV, video playback, and expanded view. You can also create slide shows (with over 150 transition effects), and apply basic edits like resize, rotate, red eye removal, and things like that. To know more, click this link. 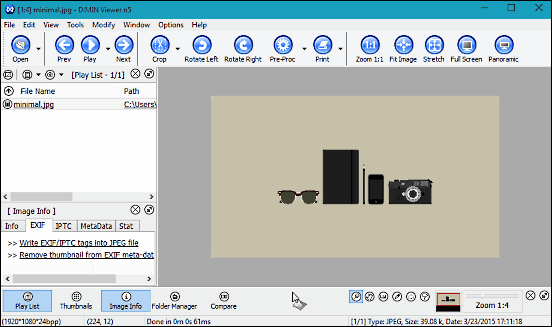 Rounding off the list is DIMIN Viewer, a fully loaded and easy to use image viewer software for Windows 10. True, the user interface isn’t the best out there, but DIMIN Viewer more than makes up for it by virtue of the features it totes. The program supports tons of image formats, such as SWF, DNG, PCT, CPP, DV, EPT3, HDF, MIFF, SVG, and VICAR. Images in all of these formats can be opened by the application. In addition, DIMIN also lets you save images in some of these formats. And that’s not the end of it. The versatile program also includes features like in-memory caching, metadata support, multi-folder file manager, filters, and web page generation. What’s more, you can also use scripts for applying operations like conversion and renaming in batch.

Owing to nearly countless image formats available out there (and more cropping up every other day), it’s incredibly important to have an efficient image viewer application installed on your computer. And the above discussed software programs are just perfect for all your image viewing needs. Try them out, and let me know your favorites in the comments below.