Play this interesting police pursuit game to hunt down all the criminals in the streets. Find criminals and navigate the dog towards them to catch. Unlike other running games for Android, you don’t have to reach any finish line and the game gets over as soon as you catch the thieves.

The main objective of the missions is to catch the criminals who are trying to escape from the police. The criminals roam around the city shopping mall and starts running on the streets when they feel the presence of a police dog. A big green arrow will show you the location and direction of the thieves, in which you have to guide the police dog.

The following screenshot shows the police dog chasing a criminal. 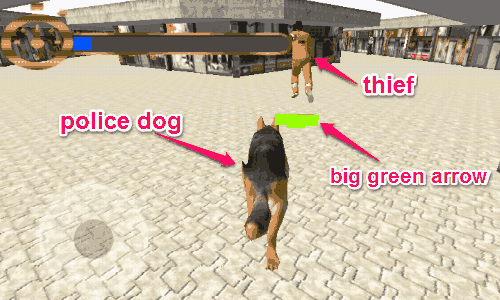 In each level, you have to hunt down 2 thieves around the city shopping mall. As per my testing, I found the graphic quality is quite nice, but the audio effect is awesome and funny. You can easily control the direction and running speed of the dog using the joystick. Let us see how to play this game.

How to Chase Criminals with a German Shepherd Police Dog:

You can download and install the game from Google Play Store or from the link provided at the end of this post.

How to control and navigate the dog:

After you start the game, you will be able to see the dog, the big green arrow, and the joystick. The position of the joystick is at the left bottom of the screen such that you can play without distraction. Simply tap and hold the transparent ball on the circular joystick to make the dog run and change its direction. It also lets you control the running speed by moving the transparent ball up and down. The following screenshot shows how to navigate the dog. 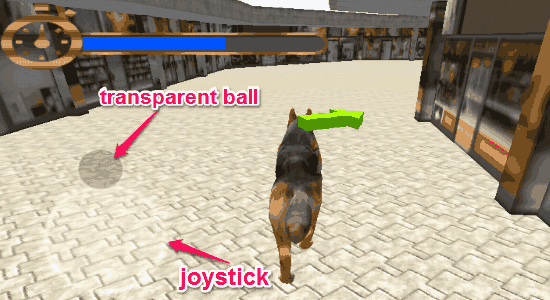 How to hunt down criminals:

The big green arrow shows the direction of the locations where the thieves are roaming. All you have to do is tap and move the transparent ball and guide the dog in the green arrow direction. After the criminals saw the dog, they will start running on the streets. So you have to chase and hunt them down before they escape. The following screenshot shows how to hunt down criminals. 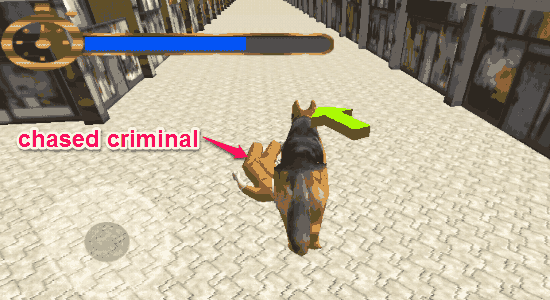 How to select levels:

Before starting a game, it will ask you to select among unlocked levels to play. You can continue playing games in order to unlock more levels. As soon as the game starts, the timer will also start running. You have to complete the task which is assigned for that particular level before the time runs out. The following screenshot shows a task assigned for a level. 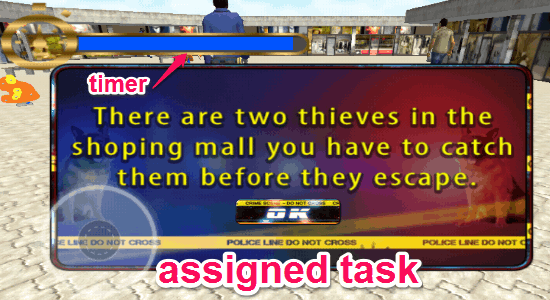 Police Dog Crime Chase is a very nice police chase game for Android. You have to hunt down all the goons roaming the streets using your German Shepherd police dog. The navigation is pretty simple which makes it easier to control the direction and speed of the dog. Give this game a try and enjoy.