Opera VPN app provides free unlimited VPN for Android to access region-based restricted websites, secure your online data, and stay anonymous over the web by hiding your online identity. That means you can now use this free VPN app on your Android phone to access all your favorite websites which are blocked in your current location, and also get rid of various Internet threats. You can choose from 5 different regions to connect to a VPN server in order to make the entire web restriction-free and secure from trackers, ads, etc. The available regions are United States, Canada, Singapore, Germany, and Netherlands.

There are dozens of VPN apps available for Android, but Opera VPN is quite unique as apart from providing a native VPN service it also blocks ad trackers from following you online and secures your unprotected Wifi hotspots or other unsafe networks to protect your information. One of the best features of this app is that it offers unlimited VPN traffic for free. 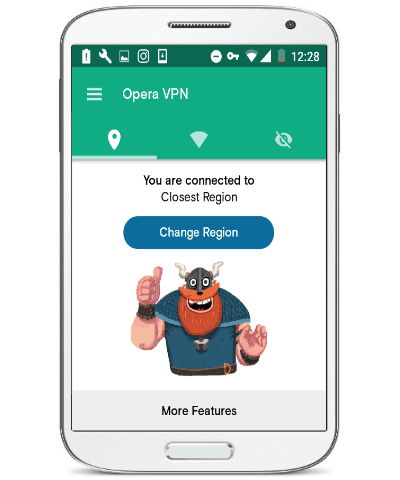 A few months back Opera launched a free VPN app for iPhone and also free VPN for Opera Browser. Now, to help the Android users to access blocked websites, block trackers, and secure Wifi connections, they have created this unlimited VPN app for Android.

How to Use Opera VPN for Android:

Step 1: When you launch the app for the first time, it will ask you to allow permission for setting up a VPN connection. After allowing that, you’ll be able to start using this VPN app on your Android phone. On the main screen of the app, you’ll see 3 different tabs with a Location, Wifi, and Tracker Block icon. 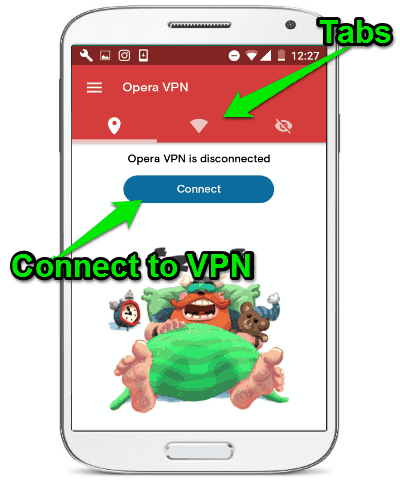 Step 2: Now, to connect to a VPN network simply go to the VPN tab and press the button “Connect”. As soon as you do that, it will automatically find the nearest location among the United States, Canada, Netherlands, Germany, and Singapore and then connect you to the associated VPN server, as shown in the very first screenshot. However, if you want to change the VPN location, then simply tap on the button “Change Region” and select any of these five available regions. 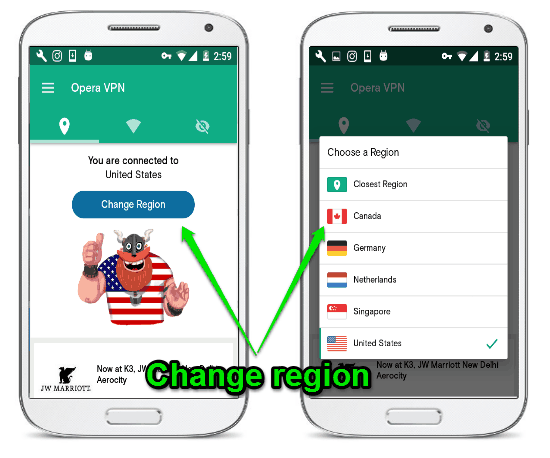 When you’re connected to a VPN server of any location of your choice, you’ll be able to access the blocked websites and apps in your current location. This app will automatically bypass the firewalls in order to help you access the web without any restrictions and also will keep you anonymous over the web.

Step 3: Another useful feature of this app is that it secures your unprotected Wifi hotspots in order to protect your online and confidential information from various Internet snoopers. Additionally, you can also test the Wifi security and generate a score by pressing the “Test” button on the “Wifi” tab. 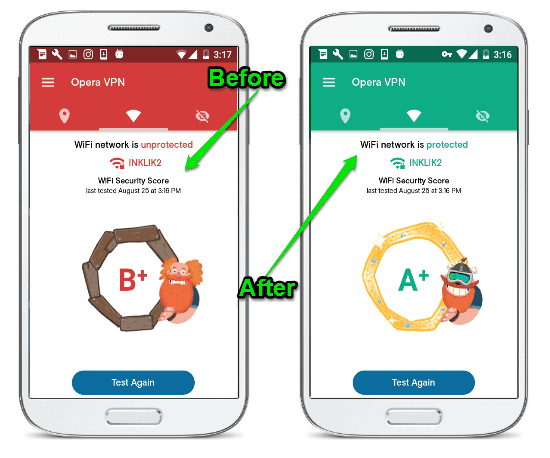 It displays the Wifi security score before and after connecting to a VPN network. As you can see in the above image that the security score is B+ when my phone is not connected to a VPN and A+ when it is connected.

Step 4: Now, the last and interesting feature of Opera VPN app is the ad tracker blocker. This feature helps you get rid of the ISPs, ad trackers, and any other kind of sniffers from following you around the web. To activate this feature, go to the “Tracker Blocker” tab and hit the Activate Guardian button. 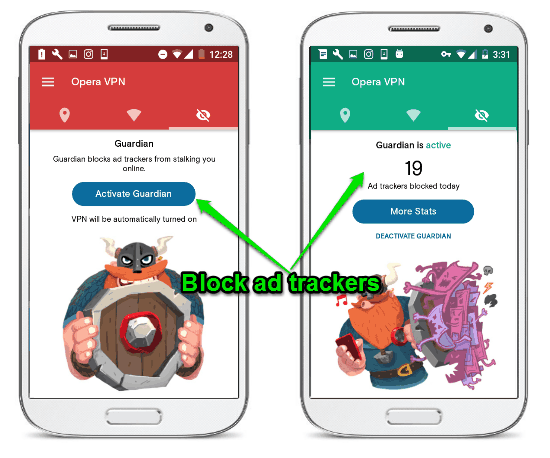 As soon as you do that, this app will start blocking all the trackers when you browse the web. In addition to that, it also displays the number of trackers blocked and detailed time statistics.

Opera VPN app is definitely one of the best and most reliable VPN services available for Android. The VPN servers offered by this app are super fast and help you explore the web without any distraction. Go ahead and start using this app to access your favorite websites which are unfortunately blocked in your location. Personally, I like Opera VPN app as it also secures your Internet connection and blocks ad trackers with ease.

Get “Opera VPN” for Android from here.