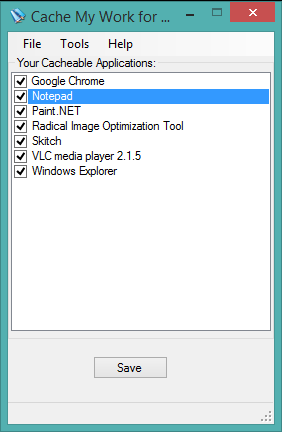 Cache My Work is one of the best software in this list to restore applications, folders, or whatever it can restore. List of all those restorable items will be available on its interface. From that list, you can select all applications or just some required applications.

Apart from this, you can also activate the option to restore all items of previous Windows session at next logon. It is the most lightweight software in this list, only 428 KB. 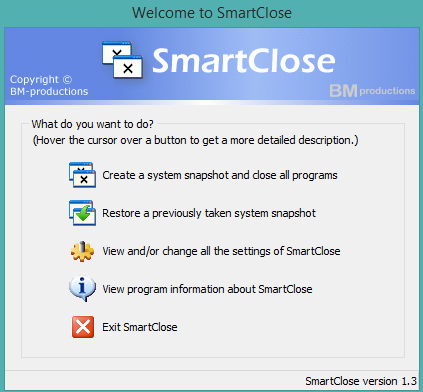 SmartClose is also a great software in this list to save running programs before closing and restore those programs after system reboot. It first creates a snapshot of the system and then closes all running programs. After this, you can use that snapshot to restore all those programs. This software can also close running services, so I will recommend you to customize settings before creating the snapshot. Otherwise, it could result in an unexpected error by closing some crucial services.

While creating the snapshot, it will also show you which applications and services are going to be closed. So you will get a good idea what could be restored after system reboot.

You can select a particular program from the list and enable an option for that program to launch on start-up. In the similar way, you can add any program and close its interface to minimize it to system tray. Whenever you will reboot your PC, those applications will open automatically.

These all are good software to restore opened applications automatically after reboot. However, Cache My Work provides a straightforward solution and also includes folders to restore after reboot. SmartClose is handy to close running programs as well as Windows services. However, you must have good knowledge to check which services you are going to close. Launcher Dock is also handy, but it doesn’t include folders to restore automatically.