I don’t know about you folks, but I’m completely and utterly fascinated by the Universe. After all, everything (and I mean, every single thing) around us, including ourselves, is a part of the Universe. From the ultra-minuscule elementary particles to the behemoth galaxies, the Universe contains it all. And as bewilderingly mind-numbing as it sounds, the Universe is the home to everything that has ever existed, currently exists, and will exist in future. With that said, the (near) infinite scale of the Universe makes it almost impossible to comprehend its size. But what if the inner science nerd in you still wants to know just how big it is?

You’re in luck, as that’s exactly what The Scale Of The Universe will help you get a grip on. An amazing flash-based interactive online tool, it gives you visual information regarding anything and everything (living and non-living), and their relative size with respect to each other. From the nearly non-existent Quantum Foam to the entire Observable Universe, it provides details about things you don’t even know exist. In fact, The Scale Of The Universe is just too good to be explained. So let’s see it in action, and find out how big is the Universe. This is seriously awesome!

The best thing about The Scale Of The Universe is that it is ridiculously simple to use, and works simply by zooming in and out with your mouse scroll wheel (or the horizontal scroll-bar provided for the same). Here’s a step wise tutorial, explaining how to get started with this fantastic online tool:

Step 1: Head over to homepage of The Scale Of The Universe, and you’ll see brief information about the tool. Click on the Start button. 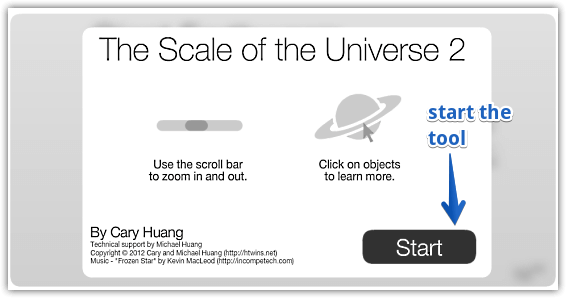 Step 2: As you do that, the tool will display a collection of living (e.g. Human, Dodo bird) and non-living beings (Beach ball, Basketball etc.), perfectly sized to demonstrate their relative size with respect to each other. To view more, simply move the scroll bar accordingly (left to zoom in, and right to zoom out), and completely different living and non-living beings that are smaller or larger (based on whether you’ve zoomed in or out) than the previously shown constituents will be displayed. The bottom right corner shows the reference size counter which changes in real-time as you zoom in and out, and it ranges from the ridiculously microscopic 10^-35 meters to the incomprehensibly large 10^27 meters. This also gives an idea of the sheer amount of constituent items The Scale Of The Universe provides information about, which range from Planck Length to the whole Observable Universe. Here’s a screen grab: 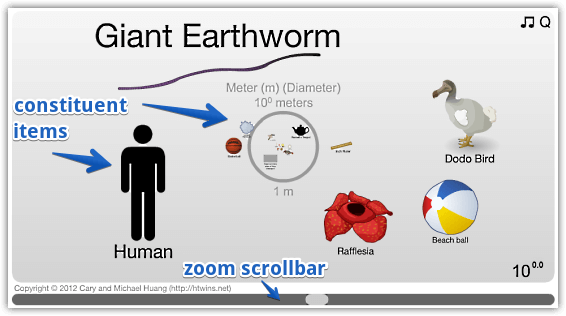 Step 3: Think what you’ve seen so far is impressive? There’s more. The Scale Of The Universe includes information about every single thing it includes, be it atoms or super clusters. To know about a constituent item, simply click on it, and a pop-up will display relevant information about it. 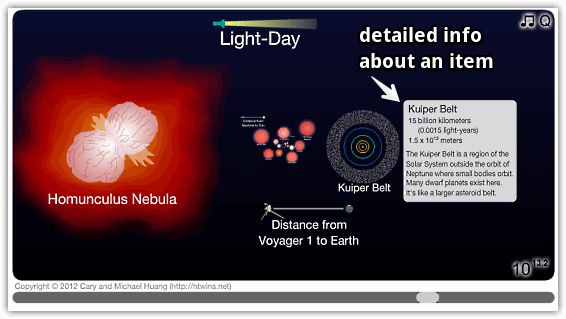 Also Check: 5 Free Websites to Learn About the Universe

The sheer grandeur of the Universe makes it both majestic as well as humbling. And if you’re a space aficionado like me, The Scale Of The Universe is something you’ll keep coming back to. Try it out, and get ready to be amazed.