This tutorial explains how to remove your mentions from any tweet on Twitter. Basically, you can now unmention yourself from any Twitter thread. This way, you will not get any further notifications when someone replies. Also, once you unmention yourself, other people will not be able to mention you again in the same thread.

On Twitter, what happens is when you post a reply to the tweet, then you get mention by other people by default. Even if you are no longer part of the conversation, you will keep receiving notifications as long as people keep adding the replies, this is because, Twitter by default mentions all the people in the thread.

The reply behavior on Tweets is now going to change. In the very recent updates, Twitter now allows you to unmention yourself. And you can do this in a couple of clicks. You can now easily unmention yourself and prevent people from mentioning you again in the same thread.

It is very easy to un-mention yourself. This feature is being rolled out to everyone and if you have it then you can find it in the tweet options. So, just go to the tweet from which you want to remove your mention. After that, click on the 3-dot icon and then it will show you “Leave this conversation” as one of the options. 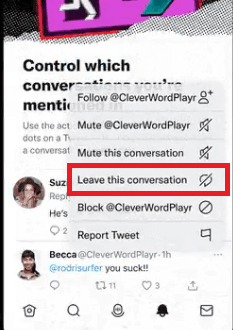 Choose this option and then it will open another popup. From here, you just select “Leave this conversation” again and it will remove your mention. This is as simple as that. It asks for confirmation, so that is a good thing. 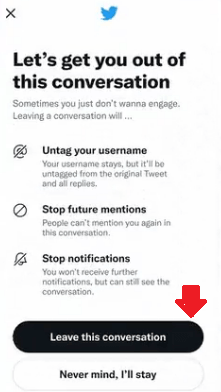 This is it. In this way, you can now easily remove mentions from any tweet. After you have removed your mentions. people in the same thread will not be able to mention you. This option will keep you safe from trolls as well as bot accounts from mentioning you again and again and pile up unnecessary notifications.

Mostly Twitter users resort to the mute option to avoid notifications from certain people and threads. But now, you will not have to rely on this workaround as unmention is officially a thing on Twitter. So, if your Twitter app shows this option then you can now give it a try.