This is a good app to kill some free time, and that too in a very good way. Rather than just wasting time, you can watch the videos of one of the most loved movie comedian of all time. The app consists of almost every movie in which Charlie Chaplin acted. To name some of the most popular (and also my favorites) include: The Gold Rush (his first talking movie), City Lights, Modern Times, and not to forget The Great Dictator. 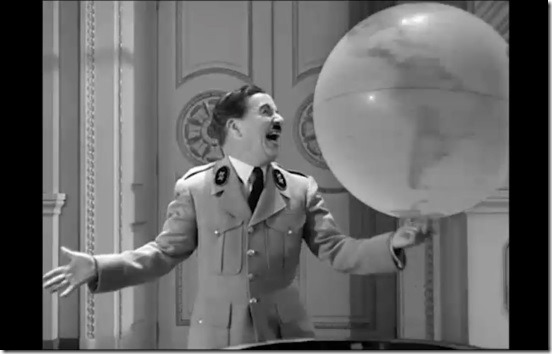 So if you are a big fan of Charlie Chaplin and love his videos, then this is a must have app for you. The app is available in the Entertainment Category in Windows Store.

The app is straight simple app, with just one purpose: help you watch Charlie Chaplin videos/movies, without any disturbances and too much of effort. Though you can find Charlie Chaplin videos in YouTube as well, but it’ll take too much time and lot of  efforts in searching each single video. And also, there are chances that you might not get few of his videos that easily, because the popular ones are easy to find, but it takes time and effort to search for the ones that did not do too well. So, this is an app that cuts all this clutter, and brings only the Chaplin videos to you, filtered. The app consists of all 85 videos arranged in a series, starting from the very first episode that Charlie Chaplin acted: “Making a Living”. 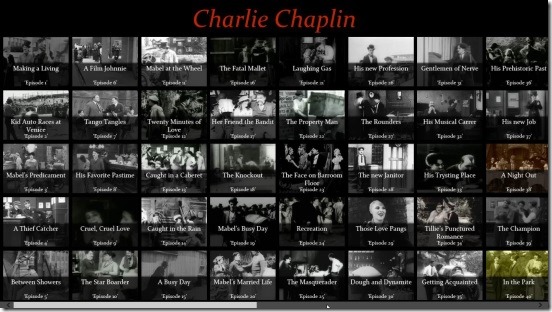 The app doesn’t have too many screens, but just the Main Screen and the Video playing screen. This makes the app easy to use. All the videos are listed in the main screen. All you have to do is click on the desired episode, and the episode gets played in next screen.

Good thing is that the app plays the videos in full-screen mode. The app has all the basic playback controls: Pause, Play, Volume, and Progress slider. Simply right-click on the screen and you’ll get all these buttons. Also, the app automatically pauses the video when you switch apps, and resumes from the same point when you switch back to the app again. 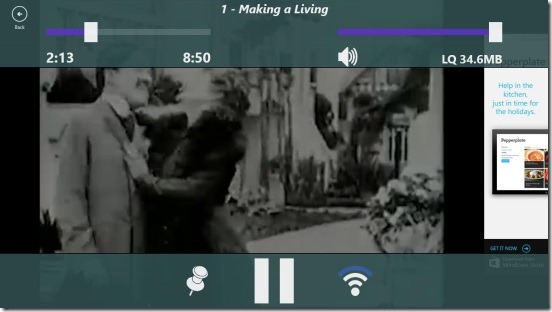 A really good feature that I liked in this Windows 8 entertainment app is, it gives you the option to pin the videos directly to the Start Screen. Using this you can pin favorite Chaplin videos and the video that you are currently watching to start screen and watch them again anytime. The app does uses internet to play videos, so people who have slow internet can watch the videos in normal quality, and people who have good internet speed can watch videos in HD mode.

Here are some other good Windows 8 entertainment apps, you might want to check: Watch Teenage Mutant Ninja Turtles Free, Puss In Boots, and The Daily Show with Jon Stewart.

Charlie Chaplin is a good Windows 8 entertainment app. It’s free, functional, easy to use, and entertaining. Though the app does lacks a very basic Windows 8 feature: Windows 8 search charm. But, other than this it is all complete app. A really good app and a good medium to kill free time.