Shotty not only captures screenshots, but also let you edit screenshots. All screenshot editing is able to be performed by this single free screenshot software. Shotty is not a heavy program and will not cause a computer’s CPU over-load or work harder and will not, in any way, interfere with the performance of other programs that may be running on the machine at the same time.

The “Delay Capture” option allows users to capture screenshots of webpage menus and the like, which tend to disappear quickly; once clicked on. This means a user is able, for example, to capture the image of a program’s tools menu, prior to it disappearing. 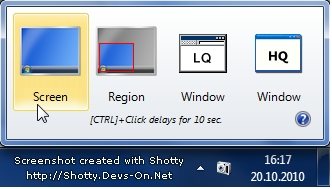 Other features of this free and easy-to-use screenshot program, include the following:

Shotty is a completely free application and users will not be asked to pay any monies a later date. This free screenshot software is available in the following languages English, German, Italian, Spanish and Polish. Don’t delay, if taken screenshots is what you want or need to do, Shotty is the program to use. Download Shotty free.