Many a times it happens that you translated a phrase earlier, and you need that. But, you don’t remember it. It is in times like these that PhraseBook comes handy. Just store your translated phrase in PhraseBook, and access it anytime you want.

PhraseBook is built right into Google Translate and you don’t need to do anything special to use it. That makes it really simple and intuitive, and of course, very useful. 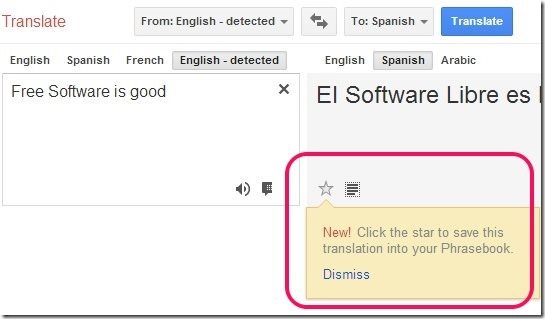 How to Store Translations in PhraseBook:

PhraseBook is quite easy to use. As I mentioned earlier, it is built right into Google Translate. When you translate text using Google Translate, then you will see option of PhraseBook in the text box that shows translated text. As you can see in the screenshot above, there is a small “star” sign that appears in bottom left corner of the box. Just click on this star, and the original text and converted text will be saved to your PhraseBook. It’s as simple as that.

How to Search for Translated Text:

The main reason of storing translated text in PhraseBook is so that you can search it later. So, let’s see how that goes. You can access PhraseBook anytime by going to Google Translate, and clicking on the icon that has a book with a star over it (see screenshot below):

This will open up the PhraseBook. This will fit nicely on the screen. It will show you all the phrases that you have converted, along with their translation.

As you can see in the screenshot above, it shows original text as well as translated text that you saved.

How to Search Phrases in PhraseBook:

If you have saved too many phrases in PhraseBook, then you can use some of the in-built tools to search your phrase quickly:

How to Remove Phrases from PhraseBook:

If you want to delete a particular phrase from your Phrasebook, just click on checkbox next to that phrase. It will show a dustbin icon at top. Click on that, and your phrase is deleted.