This tutorial explains how to use voice chat in Among Us without Discord. In this post, I will talk about a simple app that you can install on your PC or mobile to have a built-in audio chat for Among Us. You will continue to use the text chat of the game and speak to other teammates as well. The app automatically detects the lobby, and other players will be able to hear you if they are using the same app and are in your lobby.

The name of the app is BetterCrewLink and it works on Windows, Linux, Android, macOS, BlueStacks, and Chrome OS. All the participants can join the lobby and talk to each other like they normally do on Discord or Google Meet. It runs in the background or at least pretend to be a part of the game. You just create a lobby and let others join, who are also using this app.

It can be really exhausting to keep Discord and Among Us open at the same time. It drains the battery on the phone and if you are on PC then it slows down the system. And most people like to play Among Us in group with voice chat, and that’s why someone created BetterCrewLink app.

As a host, you will be able to control the volume and mute the chat if you want to. It lets you choose custom speakers and microphone devices if there are more than one connected to your PC. You can also control the chat behavior such as having private chat in vents, hear imposters in vents, only ghosts can talk/hear, voice chat in meetings and lobby only, hear through camera, and many more. 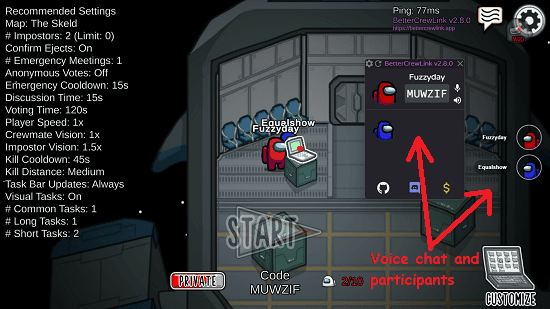 How to use Voice Chat in Among Us without Discord?

BetterCrewLink works with the following Among Us game launchers and stores.

You can download BetterCrewLink here and then simply open it up. You can see its main UI in the screenshot below. Also, for this post, I am using it on my Windows 11 PC, but you can try it on other supported operating system in the same way. It will automatically detect the Among Us installation, then you can launch the game accordingly. 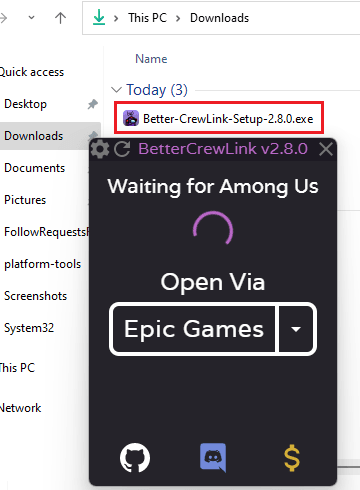 After the game has been launched, you just create a lobby for your mates. And it will detect that automatically. 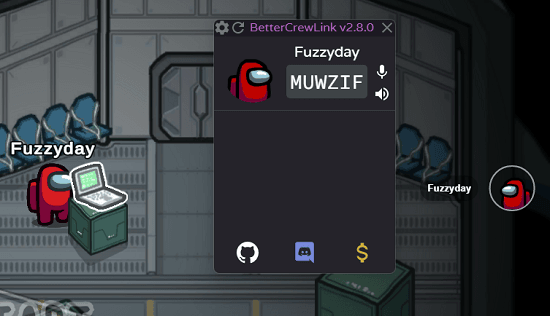 Now, you share the code with others and make sure that they are also using BetterCrewLink app. And also, they have to do the same thing as you did. After anyone joins your lobby, they will appear on the interface of the app. You can see that below in the screenshot. It will also add chat heads on the screen. 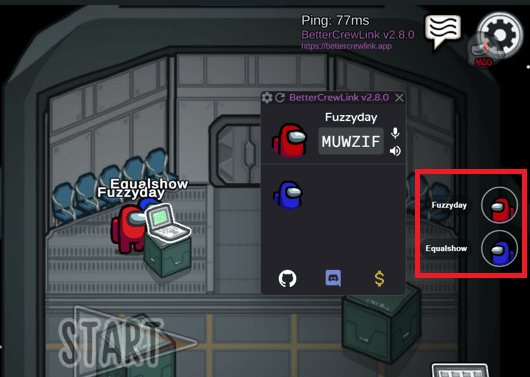 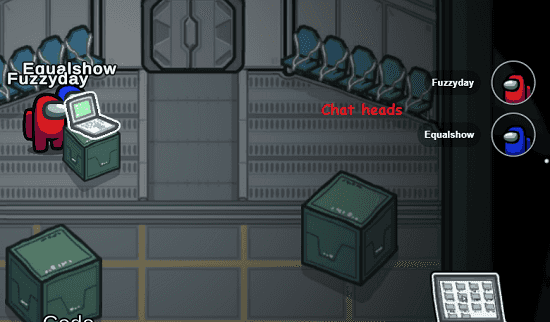 Now in this way, all the people can join and start talking to each other. Only host will be able to control the global settings. And other players will automatically have the settings disabled, as you can see below. 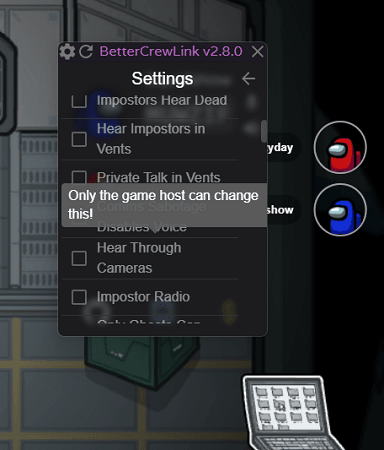 There are controls for volume, and the host can control the master volume of the chat. 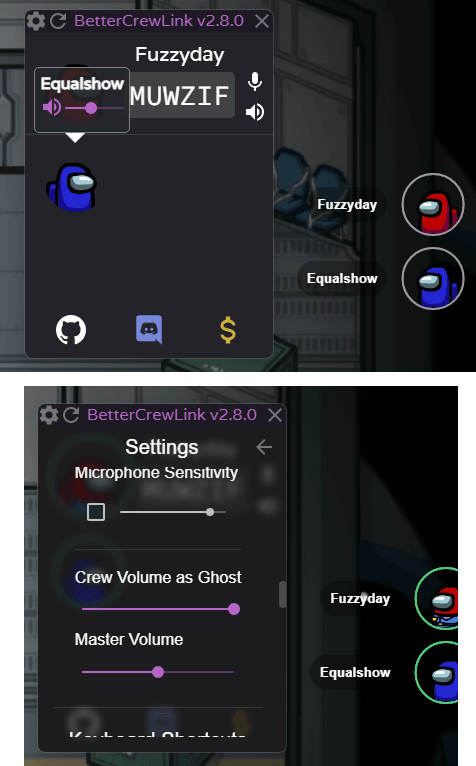 If the host wants to mute himself or want to change volumes for himself, then there are options for that. 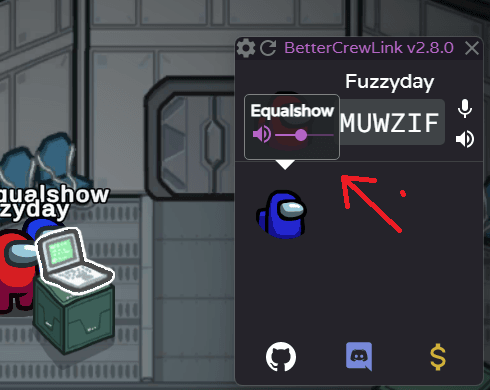 In the settings section of the app, there are a lot of options for you to configure. Here you can opt for spatial audio, hardware acceleration, echo cancellation, noise suppression, VAD enabled, and some others.

In the same way, you can control the chat behavior for others as well. If you further scroll down then you will be able to let walls block audio in the game, hear people in vision only (can be useful for hide and seek), make imposters hear the dead, ability to hear imposters in vents, private talks in vents, disable voice chat when comms are sabotaged, allow only ghosts to talk, enable voice in lobby/meetings only. You can just check these options and then all the settings will be applied automatically. 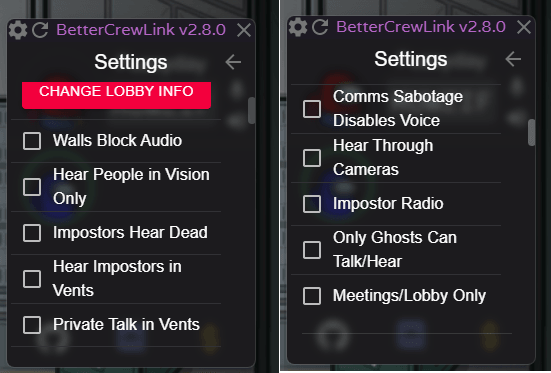 In the end, if you are having difficulties in listening to people, then you always host your own voice server. And then connect the client app to it. If you want to host your own server, then you will have to update its address in the settings of the app. 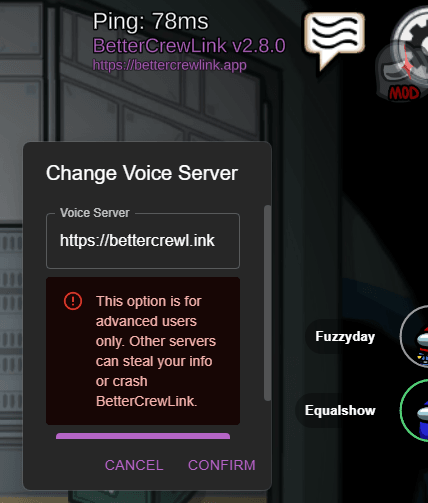 In this way, you add built-in voice chat support in Among Us. Just use this simple app and then you are simply done. Just play the game with all your teammates, even on Android. However, looking at the review, I am not sure how it works on mobile. But you are free to try it there as well, in the similar way as you use the desktop app. This is an open-source app and then source is available freely on GitHub. And in the later updates, it will support more platforms.

My phone dies in an hour or less when I play Among Us and use Discord for voice chat. And my PC becomes unresponsive when I do the same on desktop. That’s why I was looking for an alternative when I stumbled upon BetterCrewLink app. I think it is a great app and has a great potential to become popular among people who play Among Us regularly.