By Salman Khan on May 23, 2017 Tutorial
Editor Ratings:
User Ratings:

This tutorial explains how to convert Gmail inbox into to-do list. If you normally receive tons of emails daily in your Gmail inbox, then over the time the inbox becomes very messy and difficult to manage. Organizing the emails in the inbox also become a time-consuming task. But, there is a simple way using which you can now convert your Gmail inbox into to-do list such that you can easily manage and organize your emails as to-do items. This can actually be done using a free Chrome extension named “Drag“.

Similar to another Chrome extension called “Sortd“, it will automatically convert your Gmail inbox into a manageable to-do list with a layout similar to Trello and Kanban board. You can drag and drop your emails into different stages of tasks including To-Do, Doing, and Done on separate panels. For each stage, it also creates a label such that you can easily access your emails based on priority. 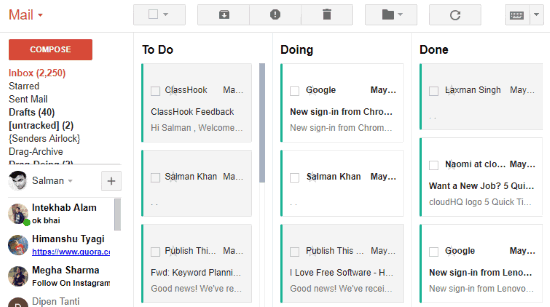 To get started, simply install the “Drag” extension on your Chrome browser. As soon as you do that, you will see an extension icon on the toolbar which will indicate that the extension is integrated with Gmail.

Now, open up Gmail and you will see that the inbox is converted into a to-do list. The inbox will split into three different panels named, To Do, Doing, and Done. Initially, all your emails will be visible on the “To Do” panel, as shown below. 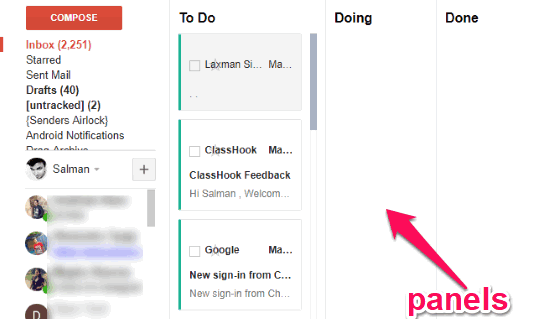 Each panel is actually a different stage of a task (Gmail email). Now, you can simply drag and drop emails from the “To Do” panel to either “Doing” or “Done” panel. Doing so, you will be able to organize your emails as to-do list items.

When you drag and drop emails on the panels, the label of the emails will also change to the associated task stage. Actually, when you install this extension, it will automatically create some labels based on the task stages (To Do, Doing, and Done) such that you can easily access emails. 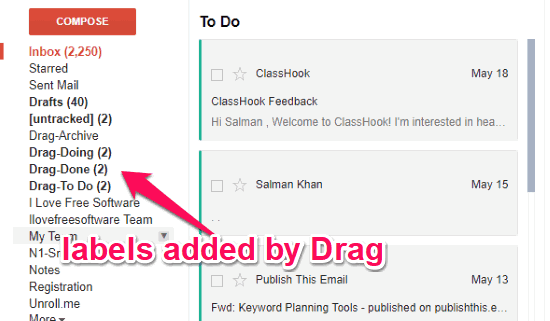 Apart from that, you can also select the email from each panel and do the normal actions of Gmail inbox like archive, delete, move to another label, etc. Archiving emails from the panels will add them to the “Drag Archive” label instead of default archive label.

If you want to deactivate this extension, then all you got to do is toggle off the “Drag” button visible at the top right of Gmail inbox. This will restore the default Gmail inbox. 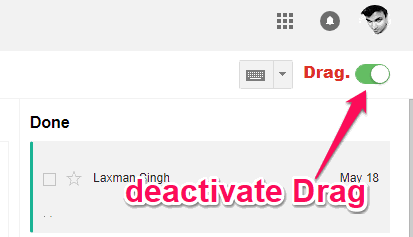 Drag is a pretty useful Chrome extension which converts your Gmail inbox into intuitive to-do list making it easier for you to manage and organize your emails. No more going through tons of emails to find any important email, as this Chrome extension helps you arrange them as to-do items.

Get “Drag” extension from here.