Mega Jump is a free iPhone fun game in which you have to collect the coins and Mega Points by jumping in the air. Your player continues to jump if he keeps collecting the coins but it will start to fall down if you stop collecting coins. The game has a total of 4 worlds to choose for playing but you have to unlock the three of them by collecting Mega Points. You can also unlock other interesting characters, power boosters, life savers, achievements etc. by collecting more and more coins and mega points. The app lets you connect your Facebook account with it so that you can compete against your friends. 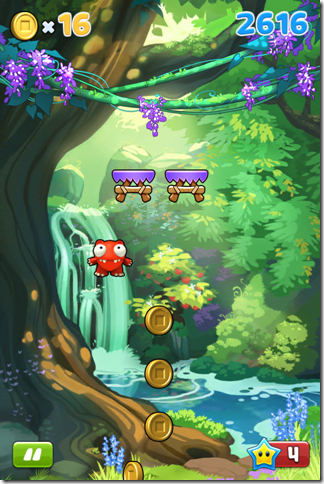 You can download the Mega Jump game by searching for its name on the itunes Store or by clicking on the link given at the end of the review. Launch the game by tapping on the icon. In this game, you have to collect as many coins as you can by jumping. Your character jumps higher when he keeps collecting the coin. If you will not collect coins, then character will start falling down. You can take the help of tables hanging in the air to prevent your player from falling. You have to tilt your iPhone in left and right hand direction in order to collect the coins. While collecting the coins, you also receive Mega Points. You need to collect these points as well because it will help you in unlocking the locked worlds.

If you want to play with other interesting characters, extra powers then you can unlock them by using the virtual currency. Tap on the Boosts option from the game’s main window. Here you will find 4 options: Player, Powers, Saves and Bank. 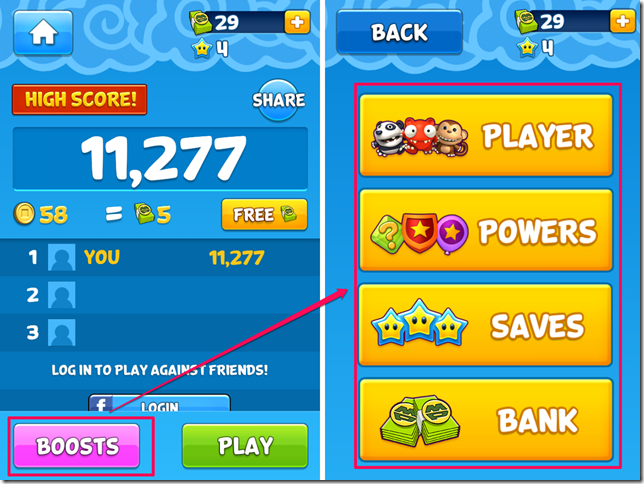 Player: Unlock various interesting and funny characters from here. Some of the characters are: Bluto, Rosie, Buster, Foxworthy, Rocky and many more.

Save: Whenever your player has lost his life then you can revive him by using this feature.

Bank: You can purchase Mega Points from here but you need to pay with real currency to buy these points.

Checkout this fun game to drive trains across towns for Android reviewed by us.

It was really fun playing the Mega Jump game. It has nice graphics and color combination. The game looks attractive from the appearance. I liked the other characters very much. They were really funny in their gameplay. You should try this game at least once.

Get the Mega Jump game from here.