Generating images by blending different geometric shapes is simple using these software. These software allow you to generate creative images and you can even set different parameters according to the result you want. Also, these software can generate the final image in various formats like SVG, PNG, JPG, HTML 5, and some others. However, for some of these software to work, you will need a graphics card installed on your PC. After that, you just have to drag and drop the images and get the result. 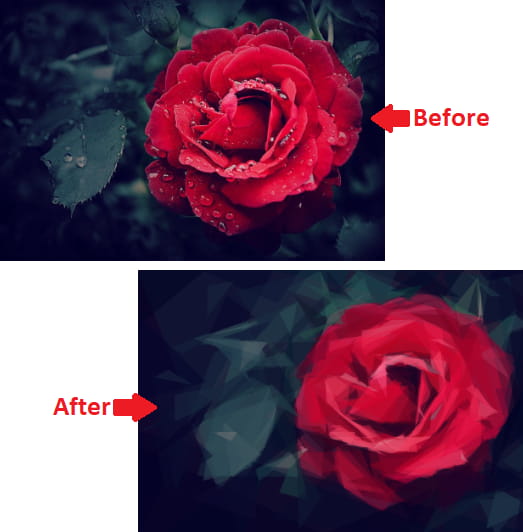 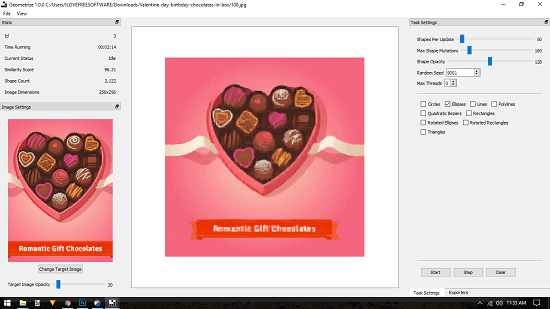 Geometrize is one of the best free software to generate geometric images in an easy way. It supports various geometric shapes like eclipses, rectangles, lines, circles, and you can blend them in any image you want. It lets you control the blurriness and the intensity of the shapes to generate the final image. You can either choose a single shape or you can also opt to use different shapes in the target image and get the result. It allows you to export the final image in various formats including SVG, PNG, JPG, and some others. However, to run this software, you will need a graphics card installed on your PC. It didn’t work on a PC without graphics card in my case.

It is very simple to use Geometrize to generate geometric images. You can download its setup from the link above and then install it. Next, you can use open it and it will show you a tutorial page. If you want to learn it, then you can opt for that. Otherwise, go to the main interface and then open an image from your PC. After that, you can specify the shapes to use and other parameters. Finally, click on the “Start” button and it will start generating the image.

You will have to wait for sometime to get the fully generated image. After that, you can click on “Exporters” to save that. It will show you a list of file formats in which you can export the final image.  After you have exported image, you can again import it and geometrize it once again. It will give an awesome effect to your image. 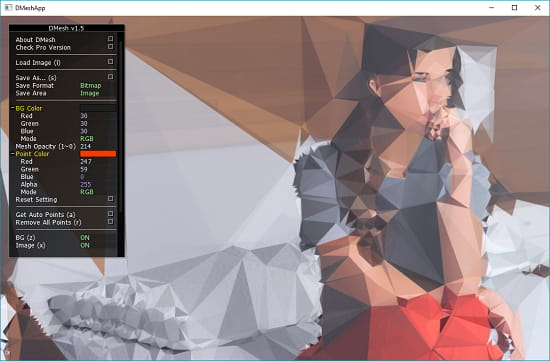 DMesh is simple geometric image generator software for Windows. It simply takes an image from your PC and shows the final generated image. You can configure various parameters to tweak the output. It allows you to retain or remove the background and some other options. It supports PDF, PNG, BMP, and OBJ file formats to export the final image. There are no other features or options in it to choose the custom shapes. You just give it an image and get the output.

DMesh is primarily meant for MAC but the developer has released a free version for Windows too. It runs without installation and just need a good graphics configuration to run on your PC. There is tool box on the left side that you can use to specify the options to tweak the output. You simply import a file, apply the geometric effect and export it back in an easy way.

Primitive is a command line geometric image generator for you to use. It is a very powerful tool that you can use. You just have to run a simple command with the target image name as parameter to geometrize that. It takes a number of shapes as a parameter to generate final image and then starts its work. It supports triangle, rectangle, ellipse, circle, rotated rectangles, beziers, rotated ellipse, and polygon like shapes. You can specify that in the command it will generate the final image in the specified manner. It supports 4 different formats to produce the output image including JPG, PNG, GIF, and SVG. And since it is a command line tool, so you can use it to generate multiple images easily in a few seconds.

To use Primitive, you have to download its binary EXE file and copy it to the folder that contains the target image files. Next, open command prompt in the same directory and run this command in the same format. Just change the input filename and output file name.

This is the basic command to generate the geometric image using Primitive. The “n” parameter shows the number of shapes you want to blend in the final image. For more sophisticated use, you can see the GitHub page of the tool to learn more about how to use it to generate geometric images.