ShootIt! is a free Windows 8 shooting game app. It’s a very basic and simple Windows 8 shooting game app, where you have to shoot at the target, to get scores. It’s a fun casual game app, and has really simple controls and gameplay. You’ll get a target to shoot at, using unlimited bullets. Hitting target is not that easy, there’ll be multiple rotating bars, that is obstacles in between you and the target. Hit the target by matching the timings between the rotating bars, and get the highest score possible. But, watch out for the bullets because, they might bounce back to you. You’ll get a health of 500 points. Try to hit the target maximum number of times before your life turns 0. 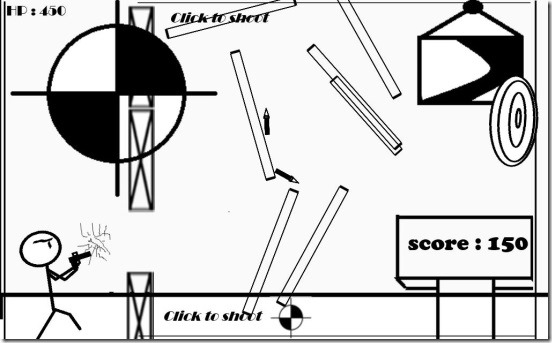 The game is so easy to learn that, it takes hardly a minute to learn playing it. Everything is simple and placed right in the screen. There’s nothing that’s complicated or pops out suddenly. The game has simple 2D graphics. The graphics are basically sketches. So, the good thing about the game is, it’s lightweight and runs without any issues. The controls are also quite easy. All that is required is, simple clicks. Your position in the game is fixed, which is the lower left corner. However, you can rotate the character up or down, by moving your cursor. This helps in getting the right angle and right timing to fire. Hitting the target each time, gives you 75 points. 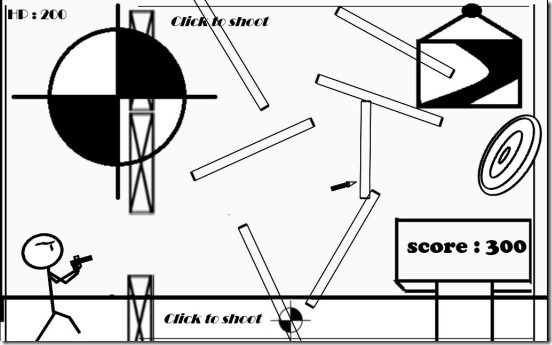 The gameplay is what makes the game different and fun. The target is at the right side of the screen. And, to make it more hard, the target itself moves up and down. Hitting target sounds simple, but it’s not that easy. You have to avoid the rotating bars and even, use them sometimes, to hit the target. The bars moves and rotates randomly. And, you have to wait and match the timings with the bars, so that you can successfully hit the target. The bullets that you fire, are unlimited. So, no need to worry about running out of bullets. And, the cool thing is that the bullets can bounce off the bars. You can use this option as an advantage, by firing in such a way that, the bullet bounces off the bars and ultimately hits the target. 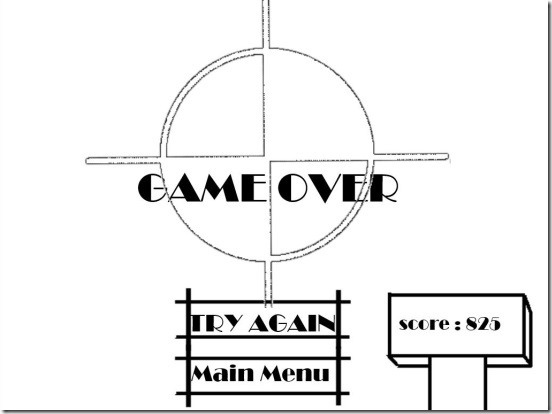 But, this option can go wrong as well. If you were not able to match the correct timing, then the bullet can bounce back to you and hit you. Which, reduces your health meter by 50 points. And, if you lose all the health then, the game ends at that very point.

Still looking for some more good Windows 8 shooting games, then check out these: The Slunchies, and Stupid Zombies 2.

ShootIt! is a good Windows 8 shooting game app. The best thing about the game is, its simple and runs without any lags, also, it doesn’t need internet to run. The only thing that it requires, now is, ability to save previous best score. Otherwise, it’s an all good casual game app to play.