Leawo PSP Video Converter is a free video converter that helps you to convert any video to PSP MP4 and PS3 MP4 format. You will be able to convert all common audio and video files, online videos, movies, etc to PSP and PS3 supported audio and video file. This free PSP converter is considered as a universal PSP video converter as it can convert any video to PSP and PS3 supported video. The converted videos can be played with the portable players Sony PS3 and PSP. 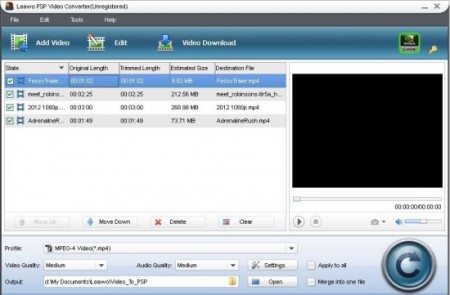 You can convert any video format including FLV, WMV, AVI, RMVB, RM, MOV, QT, MP4, DV, 3GP, MPG, MPEG, MP3, DAT, etc. to PSP and PS3 supported video and audio format. You can also convert video files to popular audio formats including WAV, AAC, MP3, M4a, etc. If you have a PSP or PS3 and you want to watch movies, your downloaded online videos and other video files in them, this free PSP converter is the best software for you. Just select the preferred video files and let this free PSP converter handle the rest. Leawo Free PSP Converter comes with all the features that you expect to see in a free PSP converter.

This free universal PSP video converter comes with lots of exclusive features. All the functions are practical and can be used by almost any computer user without any technical knowledge. You will be able to stream video to PS3 or convert videos for PSP and PS3. You will be able to convert video to audio, convert video to PSP MP4 and PS3 MP4, convert your videos in batch mode and join multiple video files into one big file. There is a Pro version available of this software if you want to enjoy some more exclusive features of Leawo PSP Converter.

You can also check out other similar software like Movie2X Free PSP Converter, and Miro Video Converter reviewed by us.