What I like most about this Firefox add-on is its ease of use. You just need to right-click on any tab that you want to move, and it will open a context menu from which you can pick the window to which you want to move the tab.

How to Move Firefox Tabs Between Different Windows:

As I said above, it is very easy to use this Firefox Tab Mover add-on. Start by installing it from official Firefox add-on repository here. This add-on does not require a browser restart. Also, it does not add any icon to Address Bar of Firefox. Just install it and you can start using it.

To move a Firefox tab to any window, just right click anywhere on the tab, and you will see the standard context menu that Firefox opens. You will see a new option in the context menu titled “Tab Mover”. This is the option added by this extension. Mouse over it, and it will show 2 options:

These options can be used to move tabs in following 4 scenarios:

Move Firefox Tab from Normal Window to Another Window:

If you want to move a Firefox tab to another window, then mouse over “Move to Window” option. Then you will see list of all the windows that are opened, including Incognito windows. It shows the name of first tab of each window to help you identify the correct window. Just click on any window, and it will immediately move that tab to the selected window.

This also can be done in the same manner as the options above. Open Tab Mover context menu and mouse over “Move to Window” option. Then in the sub-menu, you will be able to see list of all open Incognito windows with “Private Browsing” added to their name. Just pick any Incognito window to move tab from one incognito window to another. 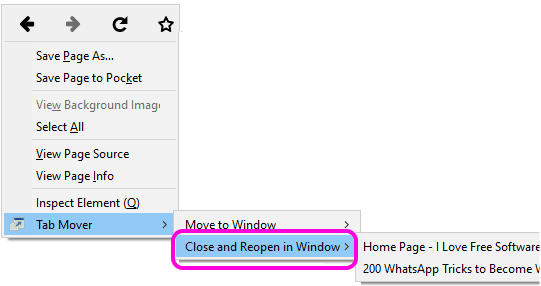 For this, open context menu, and again select Tab Mover option. Now, mouse over “Close and Reopen in Window”. This will show all the normal windows. Just pick any normal window, and your tab will close in Incognito window and will reopen in the normal window.

During my testing, this addon worked fine most of the time. I did face trouble sometimes moving a tab from normal window to incognito window and vice versa. But I see that the developer has been constantly updating the add-on, so I have a feeling these kinks would be ironed out soon.

Some other Tab management add-ons for Firefox that you might want to try are:

I really like simple tools and add-ons that ease things. And this addon definitely falls in that category. It makes it super easy to move Firefox tabs from one window to another. As I said, you might come across some issues initially, but they might be removed in due course of time. So, I won’t hesitate in recommending this Firefox Tab Mover add-on.