The program is not short of features but has been designed to be very easy to use. SpeQ Mathematics is also very portable and can even run on a removable drive or flash drive. It can run on any windows based operating system and is available in 15 commonly spoken languages including Chinese, Russian, French and Portuguese.

Features of this math solver

SpeQ Mathematics- math solver has quite a number of features

How to use this intuitive Math Solver

The interface is intuitive and you will have no problems finding your way around. There is the usual menu bar at the top, program icons below it and the worksheet comes in between the Memory and Functions toolbars on either side. Comments, functions and answers are all coded in different colours. 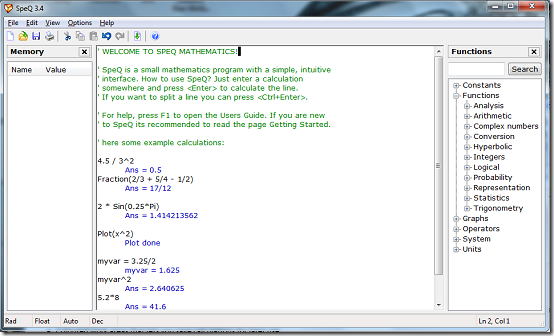 To begin calculations, it is recommended that your clear the working are but you could also continue without doing so. Type in your calculations and hit Enter to get the answer. A line break can be inserted by pressing Ctrl+Enter. The Memory toolbar lists all answers, variables and constants used on any sheet. The left Functions lists all available inbuilt mathematical functions. New sheets can be created via the File menu or using the new sheet shortcut. 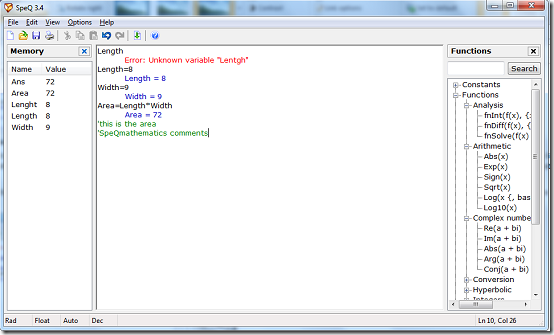 Remarks can be added by including the apostrophe in front of any line. Any text that comes after the apostrophe is treated as a remark. Custom variables are declared by typing the name of the variable and equating it to a figure. Functions require that you equate your function to a variable with the coefficient enclosed in brackets. Plotting graphs is done with the help of the plot function. The plot function requires that you enclose the arguments in the brackets provided by the function. Sheets are saved via the File menu or just by the conventional Ctrl+S.

The Edit menu allows users to perform editing functions like clearing sheets and memory, adding and removing comments. What you want to view on the interface can be selected on the view menu. You can choose to view toolbars, memory tree, function tree and font toolbar. Number of decimal places and the desired number representation can be set via the Settings menu. On the same menu, you can change the language and set window control options like minimising to tray and setting windows to stay on top. Help is available and was very helpful.