Here are 3 best free software to transcribe scanned documents. These freeware help you in transcribing documents which cannot be transcribed using OCR, and have to be manually typed. Some of the following software also support built in OCR and some of them provide a spreadsheet to transcribe tabular data. Most of these software let you import documents by scanning them using an installed scanner while some of them let you import images from local storage. Using any of these below mentioned freeware, you can easily transcribe old letters, documents, and various scriptures quite easily.

Sometimes, the images or other documents are so old that you can’t extract text out of them using OCR software. So, for extracting the text, you will have to do it manually by typing it word by word. That’s where these free transcribing software come in handy. 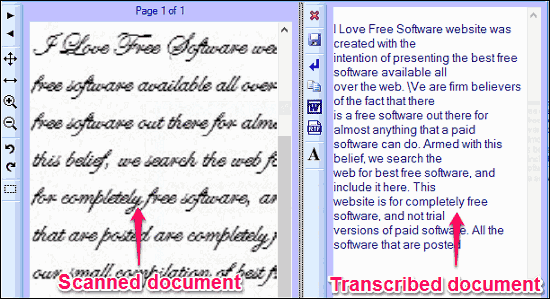 Let’s see what it takes to transcribe scanned documents using this free software.

Transcript is a free software to transcribe scanned documents. Though it’s a paid software, but you can use it at free of cost for personal use. Its’ a very unique software that can acquire documents from a connected scanner or TWAIN devices. You can also import images directly from your local storage. The interface of Transcript is organized in such a way that at the upper part is for viewing the scanned document while the below part is a text editor. After you have opened your image in it, you can type text in the editor by seeing text from the image line by line. And the best part about it is that when you hit enter key after the end of a certain line, then it also auto scrolls the image to the next line.

Using Transcipt is pretty easy. First download and install it from the above link and after that you can start importing your image in it. As I have mentioned above, you can acquire target document from the attached scanner or a TWAIN device. And its assisting capability is what that makes it a decent transcriber software. You can see the below screenshot, showing the interface and working of Transcript. 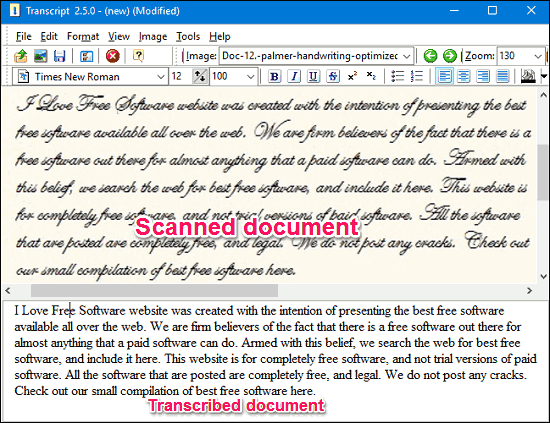 Apart from transcribing, Transcript also offers some other text formatting options for the text that you have typed in its editor. Transcript provided basic formatting options such as bold, italic, underline, subscript, superscript, strike out, paragraph tools, and many more. And when you have typed the text, you can export your text to an RTF file.

So, in this way you can use Transcript software to transcribe scanned documents. Though for more features you will have to ultimately switch to the paid version as it has more features that make transcribing documents even easier.

GenScriber is another free software to transcribe scanned documents. It has a very similar interface as that of Transcript. However, here you cannot acquire documents using the installed scanner on your PC. It lets you open an image from your PC, and after that you can start transcribing text from it. It provides most of the text editing and formatting options such as, bold, italic, underline, and some other paragraph tools. And the best thing about this transcriber is that it also provides a spreadsheet in case you are dealing with tabular data. And when you are done, you can export your spreadsheet file to CSV and text file to TXT, PDF, HTML and RTF like formats.

For getting started with GenScriber, first get it from the above link. After that, launch it and load your image file from desired directory. When you have opened your image in it, then from the bottom of its interface you can choose whether you want to use the text editor or the spreadsheet using the dedicated tabs. And when you have typed all the text, you can export the text file to various popular formats as stated above. 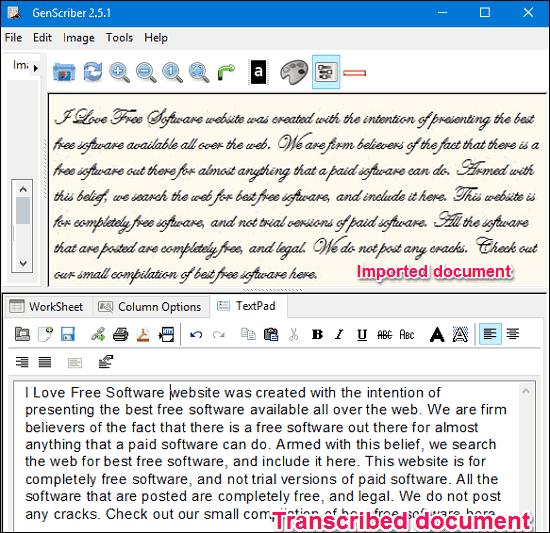 So, it was the case with GenScriber to transcribe scanned documents. It’s pretty simple and offers spreadsheet also to type tabular data from images, so, if you are looking for tabular data transcribing software, then you may give it a try.

FreeOCR is a free OCR software to transcribe scanned documents. Though it is not meant to transcribe documents but it can be used to do that as it provides an editor next to the image viewer window. It can acquire documents right from the installed scanner on your PC, thus you can directly scan an old document without converting it to image first. It can also import images from local storage and you can also import a PDF file for text extraction. And after transcribing text, you can export it as Word, HTML, TXT, and RTF file.

One advantage of using this OCR software is that you will not have to type the entire text word by word. As it’s an OCR software, so first you can extract all the text from the target document and then edit that part which is not read by it. So, it can save you some time in transcribing a particular document. You can see the below screenshot, showing FreeOCR in action. 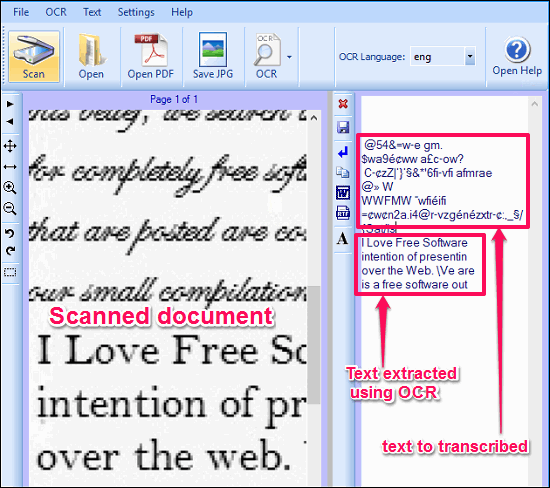 Additionally, you can copy the extracted text to clipboard and remove the line breaks from it. Support for multiple languages for text extraction is what that makes it a very nice OCR software. Currently it supports 12 languages for OCR and other language packages can be installed additionally. So, if you want a transcribing software with a support of multi-language OCR, then FreeOCR is worth a shot.

These were some pretty cool software to transcribe scanned documents. Some of these also offer built in OCR support, thus saving your time in transcribing a particular document. So, depending on which software suits your need, you may give it a try by downloading it from the given link.