In MathGrapher you get options for Trigonometric functions, Curve Fitting, Iterations (maps), Ordinary Differential equations, Lindenmayer systems, Cellular automata, Data, and Matrices. Also, the MathGrapher offers special functions like Random, Fresnel, Exponential, and many more. I have tested the MathGrapher in Windows 7 and it worked great for me. I have used MathGrapher to plot graph of Sin(x) both in 2D and 3D graph form for function F1 . See below to get an idea for the 2D and 3D graph that I plotted in MathGrapher.

Working With The MathGrapher To Plot Graphs:

When you start MathGrapher, you see the nice user interface. The User interface is fine and the options are well placed in the menu toolbar. 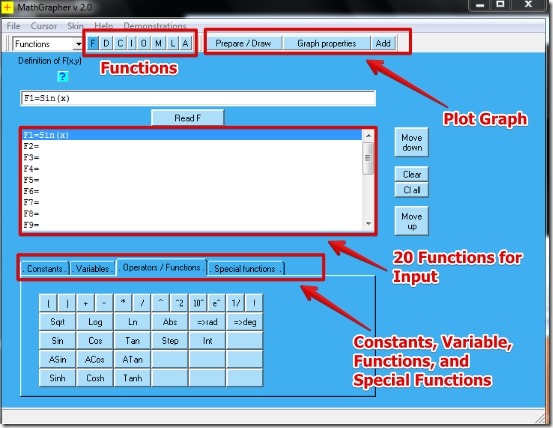 MathGrapher lets you save your work for function, data, and image.

You might also want to try Graphs Made Easy. It is a free graph making tool that helps you to create attractive graphs.

The MathGrapher is great software to plot graphs. What I really liked is the large predefined and special functions that can be used to plot the graph. Also the 2D and 3D graph plotting is great. Based on the great functions and easy graph plotting I would recommend you to try it out.