Save on Facebook is a newly announced content bookmarking service by Facebook. Announced just hours ago via an official blog post on the social networking giant’s news page, Save on Facebook lets you bookmark anything and everything shared on Facebook that you find interesting for checking out later. This makes it sort of a bookmarking thingy. This feature can come in really handy in situations when you find an interesting post shared on Facebook, but don’t have the time to check it out. Your saved items can be viewed from any device that you use to access Facebook. The saved items stay private unless you share them with others. It even shows you occasional reminders to check out saved items. The Save feature will be rolled out gradually, and will be eventually available to all existing (and of course, new) Facebook users. Sounds interesting? Keep reading to find out more.

Note: Couple of days back, we posted an article detailing how to bookmark Facebook posts to access them later, using some third party bookmarking services. It’s great to see that Zuck’s team has finally included this feature natively. Better late than never! 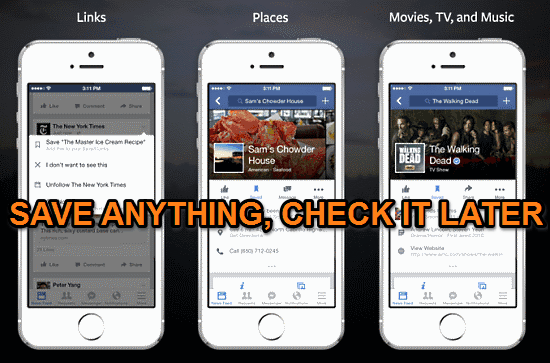 Unless you’ve been living under a rock for a really long time, you probably know (and quite certainly use) what Facebook is. The world’s biggest online social network, Facebook lets you share and connect with your friends and family. You can share anything, from photos and videos, to hyperlinks and funny posts. Billions of people use Facebook on a daily basis, viewing, sharing and commenting on posts, day in and day out. But with so much content being posted on a daily basis, it can get difficult even for the most ardent of FB users to keep up. But fear not, you social addicts. Facebook has just announced a content bookmarking service, called Save on Facebook, that lets you save (what else?) interesting things for later reference.

To put it simply, Save on Facebook is a social content bookmarking service. It lets you save anything that you find interesting on Facebook (e.g. posts, hyperlinks, music, and videos) for later referencing. So if you have too much of interesting stuff but not enough time at your hands, you can simply save it and come back to it later. Mentioned below, are some important facts about Save on Facebook:

Save on Facebook has just been announced, meaning that it’s not yet available to the users. The feature will be gradually rolled out to everyone on the social network. In any case, using Save on Facebook is really easy. Simply find the post that you’d like to save, and click the Save button on its bottom right corner. The saved items can be easily accessed under the Saved section. Easy-peasy!

Save on Facebook is a great feature, and something that I believe should’ve been here much earlier. The ability to save anything for later reference is really great, considering how much content is posted on Facebook per second. The fact that your saved items stay private unless shared with friends makes it even better. It’s a feature that die-hard FB addicts will really find worth it. All you guys have to do is just wait until that Save button pops up!