Word Lens is a free iPhone translator app which lets you translate printed words or text in real time. You are only required to place your iPhone’s camera over the text and the app translates it automatically. Currently, the app supports translation from English to Russian, Portuguese, German, Italian, French, and Spanish. You can also use the app to translate any of these languages to English. You can tap on the translated words to see more suggestions related to it. The app also supports manual translation of words by typing them. The best part of the app is that it can also be used offline.

You can capture the photo of the translated text and app lets you share the captured image via Facebook, Twitter, and email. The shared images contains original text on left side while translated text on right. Besides translating the words, you can also see them in reverse order using the app. 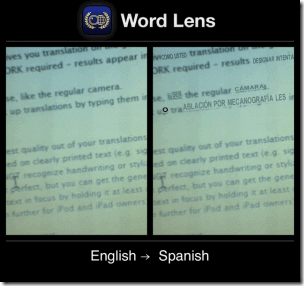 Before I start explaining working of this app, let me tell you that you first need to download the language packs separately. The app comes pre-loaded with only Word Reverse mode. All the language packs can be downloaded from within the app. To download the packs, tap on the world map icon at extreme left. Now, you can download the desired language pack from the section Available for Purchase.  Don’t get worried after reading the term Purchase as all the packs are priced at $0.00. 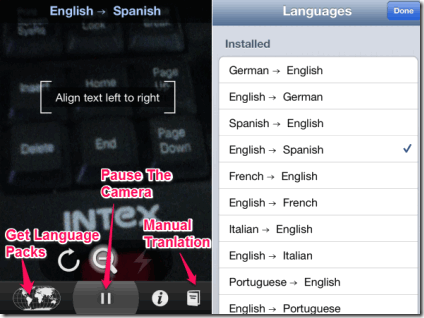 When you will download the packs, you can find the downloaded pack under Installed section on the same screen. Now tap on the pack of the language which you want to use for translation and tap on Done tab at top right. The app will take you back to home screen with your iPhone’s camera running. Now, point your iPhone’s camera over the text which you want to translate. The app will analyze the text and display the translation in real time. If you are finding some problem then try to focus your camera around the text more. 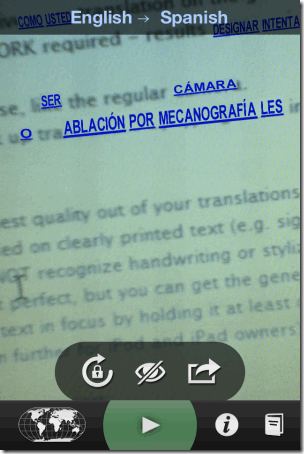 Similarly, you can use the app to translate the word to any of the other supported language including the word reverse mode. The word reverse mode only reverses the order of any word. For example, if there is a word APPLE then this mode will display the word as ELPPA. To translate the words manually, tap on the icon at extreme right from the home screen of app. Here, you will see a text box. Type the word which you want to translate and app will start displaying the suggestion automatically. 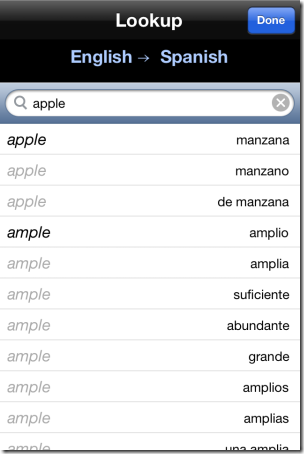 As I explained that how much easy is it to use the World Lens iPhone translator app but here are some tips which will help you in getting the maximum benefit from the app:

You may also like Speak And Translate free iPhone translation app to translate using your voice.

Word Lens is a very innovative iPhone translator app. The concept of the app is awesome and it also displays the translation exactly the same, if you follow the instructions and keep the above mentioned tips in mind. The sharing option of the app also makes it a good app, in case you would like to share the translated text. The only thing is that they should have added more language packs to make the app more powerful.