Speak And Translate is a free iPhone voice translator app which lets you get translation for different languages using both voice and text recognition technique. The app supports 40 languages for voice recognition while 72 languages for text recognition support. Some of the languages supported in the app are: English (US/UK/Canada), Spanish, African, Arabic, Catalan, Chinese (Simplified/Traditional), Czech, Dutch, French, and many more.

The app is very quick in recognizing the languages and displays the correct translation within a few seconds. The app has Auto-Speak and Detect End of Speech feature which makes it easier for the app to display the results so rapidly. The app also keeps the record of the translation that you will do using it so that you can refer them in future as well. You can even share the translations via Facebook, Twitter, email, and SMS. 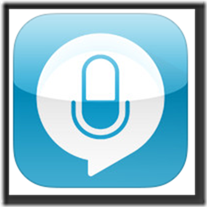 The Speak and Translate iPhone translator app can be downloaded either by searching on the iTunes App Store or by clicking on the link given at the end of this review. The good thing about the app is that it doesn’t require any type of registration or details from you for using the app. Just launch the app and start using it straight away.

The app is automatically set to English (US) and Spanish for translation process by default. To translate any language, tap on circle displaying the country’s flag. For example, if you want to translate English to Spanish then tap on the flag of United States. When you have spoken the sentence then tap again to start the translation process. The app will take about 3 seconds and you will get the desired translation. Similarly, you can translate Spanish to English. 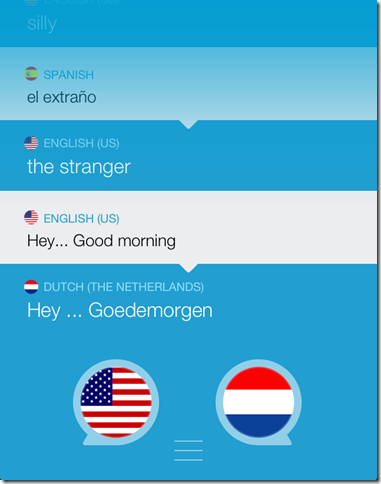 You can see from the above screenshot that there is a three bar icon at the center of the two national flags. This icon acts like your Menu button. On tapping it, it opens two options for you: Languages and Settings. 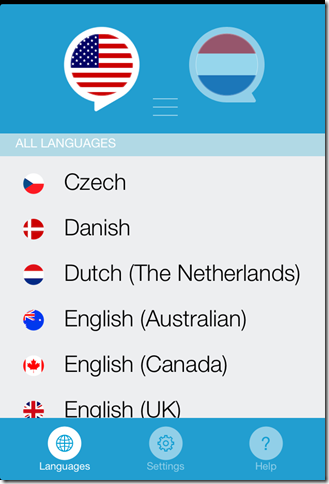 The Settings option lets you set the preferences for using the app. You can choose whether you want to do Speech to Speech or Text to Text translation. This section also has Advanced Settings. From the advanced settings, you can turn on/off the Auto Speak and Detect End of Speech. The later option is compatible only with Speech to Speech mode of translation. 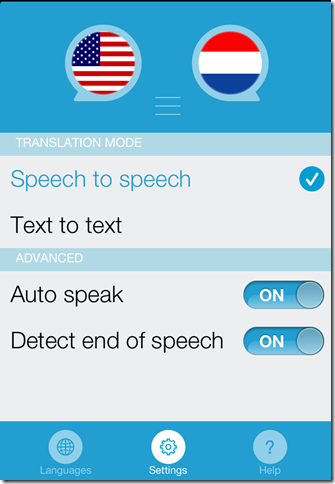 You may also like these 5 free iPhone translator apps reviewed by us.

Speak and Translate is a very good iPhone translate app. The app is very fast in translating the languages. During my testing of the app, I found it to be hitting the bull’s eye every time. So, if you are looking for a reliable and fast translating app then this one is for you.

Get Speak and Translate here.