This post contains 5 free ISO converter software for Windows 10. With these software, you can easily convert a NRG file to ISO file in a couple of clicks. They just take a NRG file from you and then create the corresponding ISO file. You can mount that newly created ISO file and then you can simply copy or access its contents. Some of the following software are primarily meant for NRG to ISO conversion while some of them come with other features such as mounting NRG files. They run perfectly on Windows 10 to convert any NRG file to ISO and should work on other version of Windows.

NRG files are same as ISO files that is disc images. However, the difference is that NRG files can only be accessed using Nero or other software that support it. ISO files have advantage that you can mount them in Windows without any software out there. You cannot do this with NRG files so it’s better to convert them to ISO. And the software I have added here will help you. You just give them a NRG file and they will take care of rest. Some of them come with an installer and some of them run in portable mode to convert NRG to ISO. 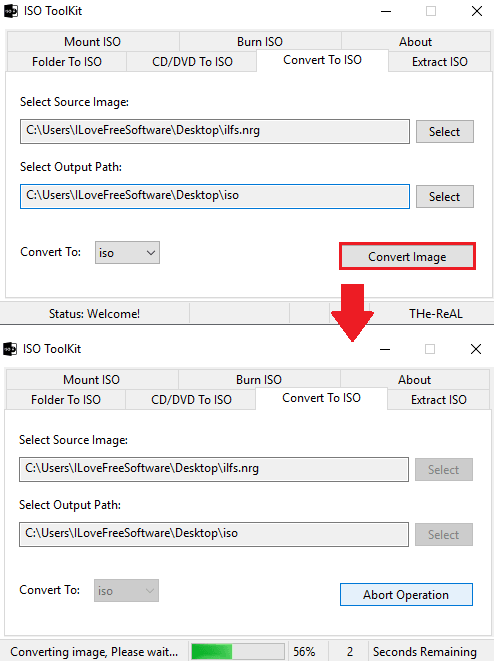 ISO Toolkit as the name indicates is a toolkit that has various modules for ISO files. With this, you can create, mount, burn, and convert ISO files very easily. And luckily, it supports the other type of disc images as well including NRG. And it can do almost everything with NRG files that it can do with ISO.

There is a tool in this software that can convert other type of disc image to ISO in a few clicks. Also, not just NRG but it supports the other type of disk image files as well such as BIN and CUE. This is a portable software and you can run it from anywhere to instantly convert any NRG file to a mountable ISO file in Windows.

Download the portable executable of this software from above. After that, just run it and head to the “Convert to ISO” tab. Specify the source NRG image select ISO as the target format. Now, start the conversion by clicking on the “Convert Image” and it will save the final ISO file at the specified location. Apart from NRG to ISO, it supports NRG to CUE and NRG to BIN conversion as well. 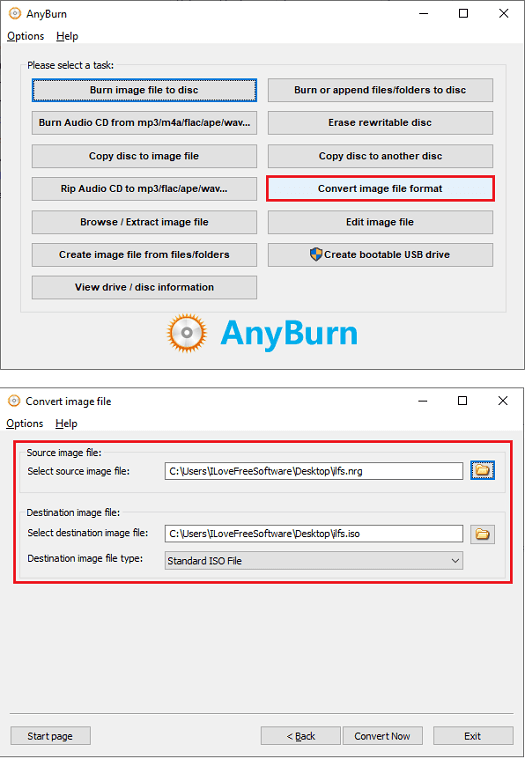 AnyBurn is another free software that you can use for NRG to ISO conversion. This software has different features in it to deal with disc images and one of those is converting those images. You can easily convert any NRG files to a mountable ISO file. It just offers you a wizard like interface where you specify the input NRG file and it will you export the final ISO file. Apart from ISO, you can opt to convert the input NRG file to BIN/CUE.

Download this software and then run it. There is an installer as well as portable version of the software available. After downloading it, select the “Convert image file” button and then from the next window, you have to specify the source NRG file and a location where you want it to save the corresponding ISO file. Proceed with the conversion process by clicking on the “Convert Now” button and it will mount that image and you can do whatever you want. 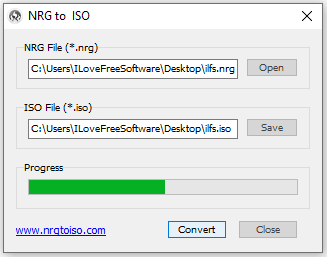 NRG to ISO is simple and dedicated software for Windows to convert any NRG file to ISO. It just takes a NRG file from you and then simply convert it to ISO in just one click. The interface of this NRG converter is very simple and there are no other tools or parameters there. It just focuses on NRG to ISO conversion which it does perfectly. After it gets you the ISO file, you can easily mount it and then do whatever you want.

This is a pretty old software but still works in Windows 10. You can get it from the above link and then simply open it up. It runs in portable mode so quickly specify the source NRG file you want to convert and specify the target location where you’d like to save the final ISO file. Start the conversion and find the ISO file at the specified location and afterwards you can either mount it to burn it to a disc. 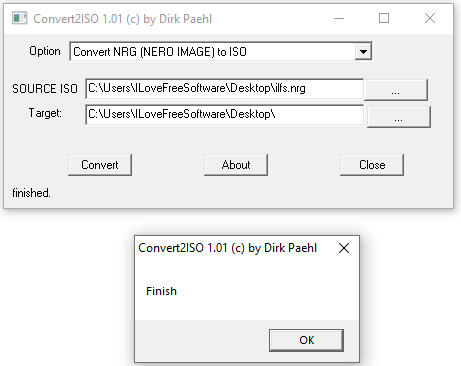 Just download this software and run it. After that, in the Source ISO field, specify the NRG file that you want to convert to ISO. The option to set the destination folder to save the ISO didn’t work in my case but by default, it will save the ISO file in the same folder with the same name as the NRG file. Hit “Convert” to start the conversion and when it is done, you can simply use that ISO file to browse through its file or just burn that to disk.

Nrg2Iso is an extremely simple program to convert a NRG file to ISO. However, the ISO file that it generates can not be mounted. The ISO file that it generates can only be used to extract out files by using any archiving program such as 7-zip. In a couple of clicks, it can create ISO file out of any given NRG file and you can either burn that or simply browse that. The interface is very simple and it only supports NRG to ISO conversion.

These are the best free NRG to ISO converter software out there and you can use them on your PC. All these software work perfectly when it comes to NRG to ISO conversion. And there are some other extra tools they have that you will like. So, if you are looking for some free software to convert NRG files to ISO, this post will be helpful. Personally, I will recommend you to use ISO Toolkit, AnyBurn, and NRG to ISO. But you can try other software as well if you want more features besides just converting NRG to ISO.