This post lists some free NRG mounter software for Windows to mount NRG files. With these software, you can mount NRG files as virtual disk in Windows in read only mode. After you mount a NRG file with these software, you can browse through all of its contents and simply copy them if you want to. In just a couple of clicks, you can mount a NRG file of any size in Windows to gain access to its contents without extracting it or burning it to a CD or DVD. Most of these software run in portable mode, but some of them are there that you have to install on your PC in order to use them to mount NRG files.

NRG file is just a CD/DVD image like ISO. The difference is that it is created by Nero which is very popular and professional CD/DVD writing software. Generally music files are distributed via NRG files that you can burn in a CD and use them in a music system. But if you want to see or access their content without writing them to a disk, you can mount them. And the software that I have added here will help you. Just specify any NRG file and they will mount that for you in a few seconds. 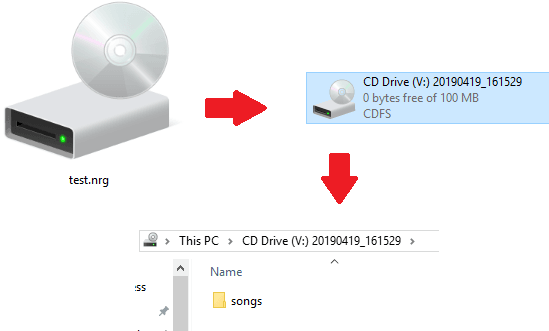 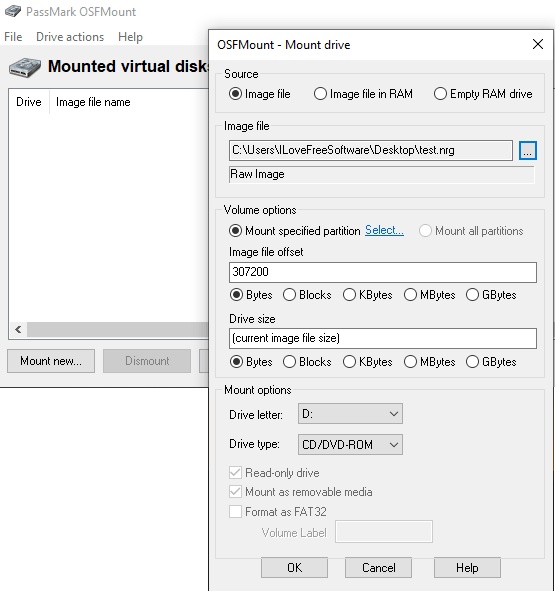 Passmark OSFMount is one of the best free NRG mounter software out there to mount NRG files in Windows. Aside from NRG, it supports other disc images such as IMG, VMDK, Bin, IMG, etc., for mounting them as virtual drive. It comes with a simple interface and after specifying the target NRG file, you can mount it in one click. It gives so many options to opt for while mounting a disk image file.

You can mount a NRG file as a virtual drive, CD drive, and floppy drive. Not only that but you can even specify parameters such as read only drive, image file offset, and drive size. Also, with this simple and straightforward software, you can even mount multiple NRG files if you have them.

Simply download this software from the above URL and then install it. Next, on from its main interface, select the “Mount New” option to specify a source NRG file. After that, specify the option there that it shows there such as drive type, drive side, image file offset, etc. After all done, hit the OK button and you will see a new drive in Windows explorer. You can see how this software looks in the screenshot above. 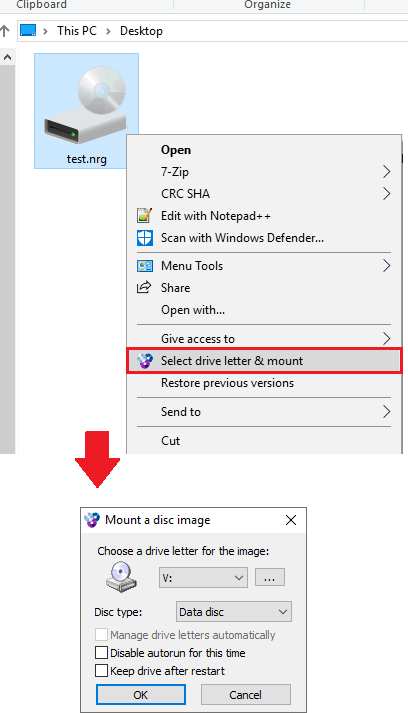 WinCDEmu is a free and open source software to easily mount NRG files in Windows. This is a very simple software that allows you to mount a NRG or ISO file as a virtual drive from the context menu. In just one click, you can mount a NRG file and access the files inside. There are just options for some setting on its interface. All the work it does from the context menu option that it adds. And one good thing about this software is that you can opt to automatically mount a NRG file as a drive en if system restarts.

This is a pretty straightforward software for Windows that you can try. Just download it from above and install it. After that, you just find any NR files that you have on your PC and right-click on it. Click on the “Select drive letter & mount” option and it will automatically mount the selected image on your PC. And after that, you are free to do whatever you want to do. You can see the above screenshot to understand how it works. 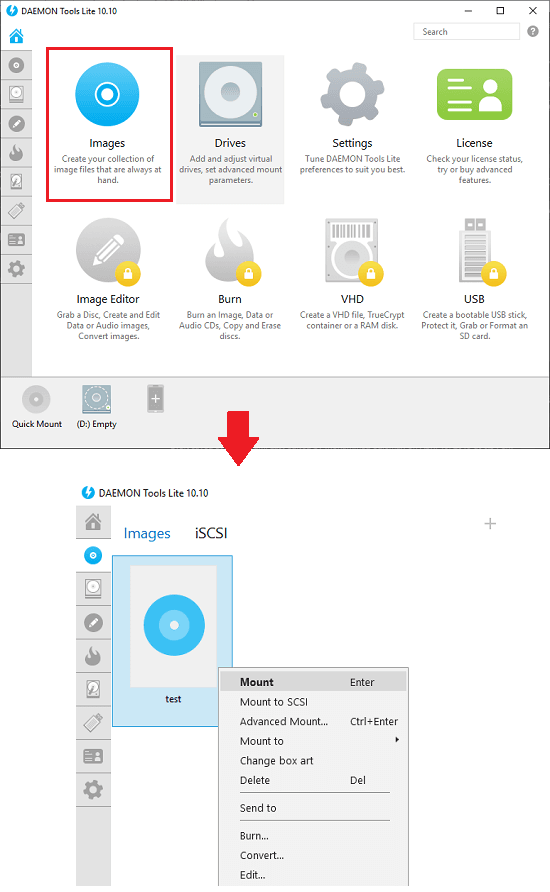 Daemon Tools Lite in the free version comes with some ads and minimal set of features which include mounting NRG files. This is a simple and powerful software that you can use to mount any NRG disk image as a drive in Windows. There are some advanced options that it offers such as mounting a writable NRG image but that it not available in the free plan. You just add a NRG file in it and then simply mount it in one click. Simple as that. Apart from NRG files, you can use ISO files and you can even burn the images directly to a disk.

You can simply go to homepage of this software using above link and then download it from there. After installing it  select the “Images” option from its main interface. After that, right-click in empty area to select “Add Image” option and then simply add the NRG file you’d like to mount. After you have imported the image, right-click on it and then select “Mount” option and it will immediately mount that. That is it. 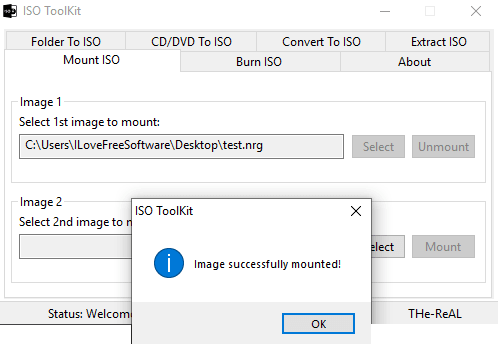 ISO Toolkit has depreciated but still works just fine in Windows 10. This tool is primarily meant to deal with disk images having file extensions NRG, ISO, and BIN. With this software, you can convert any CD/Folder to ISO or mount it. If you have working CD/DVD writer in your PC then you can burn it as an image to CD/DVD as well. It has a simple interface where you can find all the modules that has. Using one of those modules, you can easily mount an NRG file in Windows. In just 2 click, it can mount any NRG file as a drive in Windows.

This is a portable software and you can grab it from the above link. After that, you just open it up and then simply use “Mount ISO” to mount a NRG file. Click on select button and then from the windows, set file types of “.nrg”. Next, just select the NRG file you want to mount and then hit the “Mount” button. And this software lets you mount 2 NRG files at the same time. So, if you have the second NRG file then you can easily mount that in Windows 10. 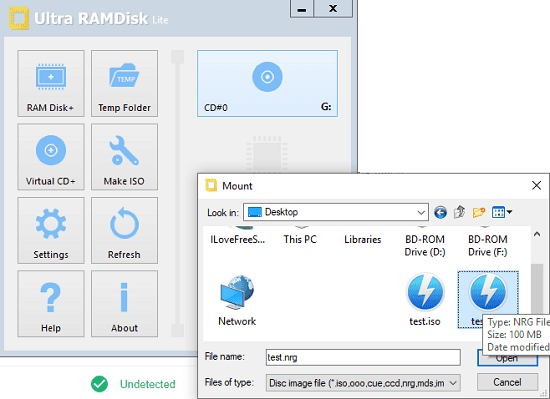 Ultra RamDisk is the last free software in my list that you can use to mount NRG files in Windows. Although some of its features are paid but in the lite version, you can easily mount a disc image. It has a simple interface where you create a virtual disk first and then map a NRG file to it so that you can browse it in the Explorer without extracting it first. It doesn’t offer you much options related to mounting images but it allows you to mount multiple NRG files.

Using this software is very easy. You just get the lite version of this software from above and then simply install it. Open it and then first you will have to create a virtual CD. Click on “Virtual CD+” and then it will create that and you can see it on its interface. Next, click on the virtual CD and specify a NRG file that will be mounted to it. When it mounts the NRG file, you can browse that from the System Explorer.

These are the best free NRG mounter software for Windows that I could find. You can use these to easily mount NRG files as disk drive in Windows. Also, not only NRG but they support other disk image files to mount them as virtual drive. Some of them are pretty straightforward while some of them give other options to opt for. Personally, I will recommend you to use Passmark OSFMount and WinCDEmu to mount any NRG file in Windows. But you are free to use other software that I have mentioned in the above post. So, if you are looking for some free software to mount NRG files in Windows, this post will come in handy.