In this post, I will talk about some best free character map replacement apps for Windows 10 and Windows 11. The following apps offer the same as the built in char map of Windows with some extra features. Apart from different character sets, they support showing and exploring all the system fonts. You can explore those sets and then simple copy them or in some cases, even export them.

One of the things that hasn’t changed even in latest version of Windows is Character Map. It has even the same classical interface that I used to see in earlier version of Windows such as XP or 98. The only notable difference is the rounded corners of the Windows 11. And that’s why I started looking for some alternative apps and I did find some which are mentioned below.

You can use these apps in place of original character map if you want to. If you work mostly on word processing apps then you maybe frequently using the character map to find and insert specific characters that are not on the keyboard. 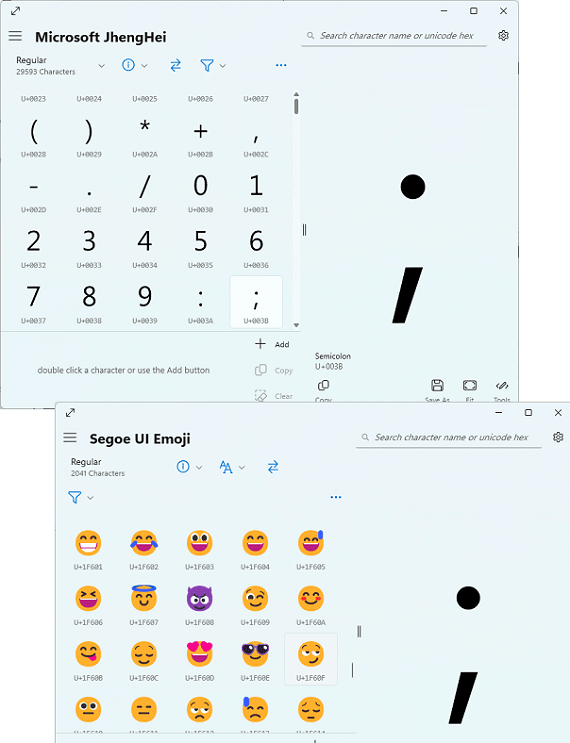 Character Map UWP is one of the best free alternatives to the Windows legacy Character Map app. Here it is a very polished app that you can use in place of the built in character mapper. It has more features as well options, and a very pretty UI that matches the look and feel of Windows 11. It can view all font families installed on your PC, different faces in a font family, all characters, symbols, as well as all the typography variants.

Here this app can be used on Windows 10 as well as on Windows 11. You can get it directly from the Windows Store and then install it. You can then start using it right away as well. Or, if you are interested in its code base then you can find that on GitHub here. You can make it as a default font viewer and search for characters in it using the search tool that it offers.

All the fonts and characters that you find in this app can be copied to clipboard in a click. Or, you can also export characters as PNG and SVG files. It has filtered view as well that you can turn on to make this app show characters from only specific families. 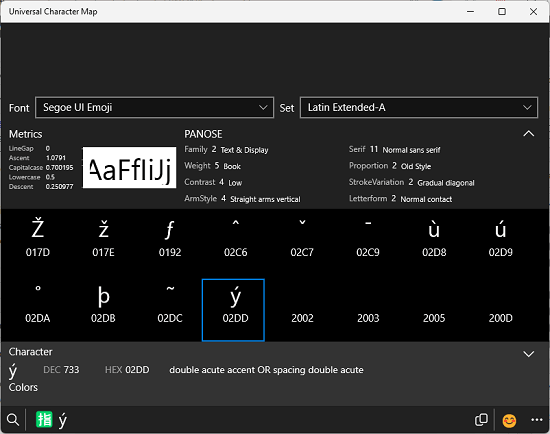 Universal Character Map is another app that you can use in place of the built in character map of Windows. Here it lets you choose a specific set to show characters and you can also copy those in a click. In addition, it shows hex codes for most common type of colors. To copy a character, you can switch to a different font scheme as well and then copy it. This is a simple and straightforward app and if you want then you can use it in place of Windows’ default character map.

The app is ad free. You can download it from Microsoft Store directly using the link above. After installing it, you can start using it right away. The main UI of the app has everything that you need. There are 2 main drop downs on the main UI; use the first one to select font and second one to select a character set. After that, it will show you the relevant list of characters. Click on anyone of them and then it will show you the options to copy it. 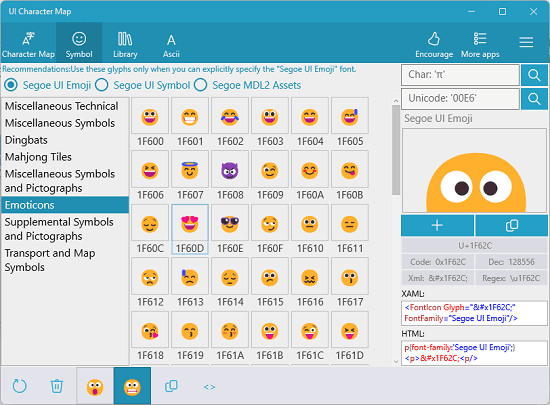 UI Character Map is yet another free Windows app which you can use as an alternative to the native character map. This is a simple app that has its own character map and you can copy any character as it is, as a XAML code, and as HTML code. It allows you to explore fonts, emojis, mathematical symbols, and other characters from different locale or character set.

This app has all the alphanumeric, CJK letters & symbols, and letters from different font sets. If you are a programmer or a writer, you will find this app really helpful. It even shows the regex match code that you can use in regular expressions to detect a certain character. If you use certain characters frequently then you can make them as favorites as well in the app for quick access.

You can go ahead and download and install this app using the link above. Launch it directly and then you can use the different tabs to let it load different character sets. You can browser different fonts too. To copy any character, just click on it and on the right side, it will show you all the things that you can copy. You can use this app in this way and in order to make a character as your favorite, just click on the “+” button after selecting it. 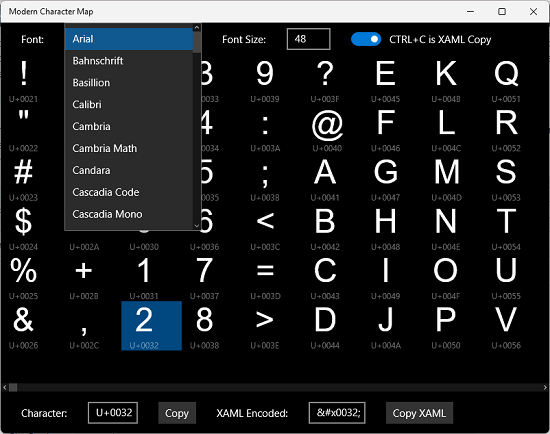 Modern Character Map is the last free app that I could find for Windows 10 and Windows 11 which can replace the built in character map application. It has a dark interface and you can explore the characters and different symbols in it and copy them in a couple of clicks. Just like the apps above, it lets you copy the character code as well as the XAML code of any character that you see here.

Simply get this app using the link above and then you are free to do whatever you want. Just launch it and it will open up in its default view where you can see the different characters that it has to offer. You can set a custom font and font size from the toolbar at the top and then it will show you the characters accordingly. To copy any character from the view, you just click on it and it will display its character/alt code as well as the XAML code.

These are the best free Windows Character Map replacement apps that you can use. All the apps that I have mentioned here can be used on Windows 10 as well as Windows 11. Use these to explore the symbols and characters from different fonts and then copy the corresponding code to the clipboard in a few clicks. Personally, I will recommend you to use Character Map UWP or UI Character Map but the other ones are worth using as well.