Last App Switcher is a free Android app that lets you switch between two Android apps with a single tap. If you are reading something online and making notes/chatting at the same time, this app will make the process a lot quicker. The app creates a floating bubble that you can tap on to switch between the two most recent apps.

As you can see in the image below, a single tap can make you jump between two apps really quickly, without having to open the task manager again and again. It might not seem like much of a difference, but when you are performing only two tasks at a time, the removal of one step in between makes a big difference. Let’s go through the App’s functioning and features in the next section. 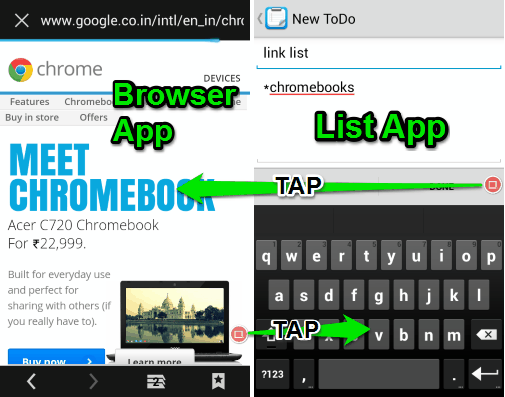 To install Last App Switcher, follow the link at the end of the post and install it from Play Store. When you launch the app for the first time, you will see a list of options to switch on or off. Leave them as they are for now and launch the web browser and a note making app.

You will notice a tiny Pink bubble (like the one in the image) floating by an edge. Tap on the bubble to switch between the last app and the one running. The last app that was open will open up, when you tap the bubble. Now you can jump between these two apps just by tapping on the Pink bubble with a bit of added cool transition animation. 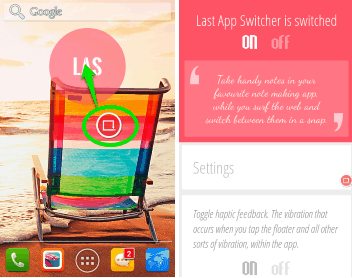 To change the settings just long press the bubble, drag it into the Pink circle that says ‘LAS‘ and let go. The screen that you saw on the app’s first launch pops up. Here you can switch On/Off the following options:

Last App Switcher (LAS) is a very cool Android app to make switching between your two recent apps really quick. If you want to switch between multiple apps, try out Task Switcher Loopr. But if you want a quick fix to chat and browse/read etc., Last App Switcher is the ideal solution.

Note: LAS did not work on Android L Developer Preview but worked fine on Jellybean (4.1).

Get Last App Switcher (LAS) here, or use the QR code below: 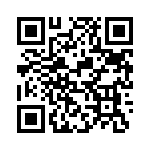