Pengu Fridge is a free Windows 8 ski jumping game app. The game is a very simple and fun game app, and works in all Windows 8 devices. However, the game is most fun while playing Windows 8 PC. The gameplay of  this game app is all about jumping from a ramp, that is track made up of snow, and successfully making it to the land while doing some stunts in mid-air. The more the number of safe jumps you’ll manage to do, the longer you’ll stay in the game and the more stunts you’ll do the more scores you’ll get; just like in real world. 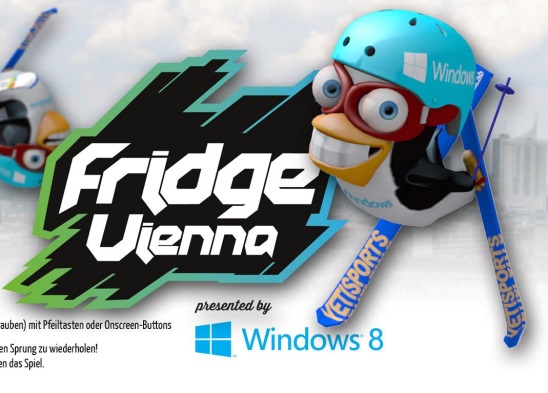 Download this game app from the Games Category in Windows Store, and play to get in the top of world leader board beating all player from all around the world. I have added link for the app at the end of this review.

In the game you’ll play as a cute penguin. The game has just one stage with just one-same ramp. All you need to do is make the penguin jump and do some cool stunts mid-air. And most importantly, make it land safe on the ground. The more the number of safe jumps you do, the more score keeps getting added to your current score. However, in order to get big scores, you have to do stunts. The harder the stunts are, the bigger the scores will get added.

The game has very strict rules, it doesn’t gives you any second chance, and if you couldn’t make a safe landing, even for the first time, the game ends the very moment. 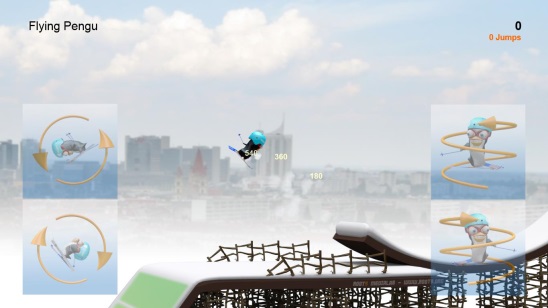 You can compete against yourself by trying to break your own best score. But it’s more fun when you try for the top place in world leader-board. The game is not that hard at all. All you need to have is a proper understanding of the game’s physics law of gravity and have a good control over the keys. The game control keys are very simple. Simply press the Enter key to make the penguin slide and the four arrow keys to control the jumps and do stunts.  And finally see if you can break highest scores. 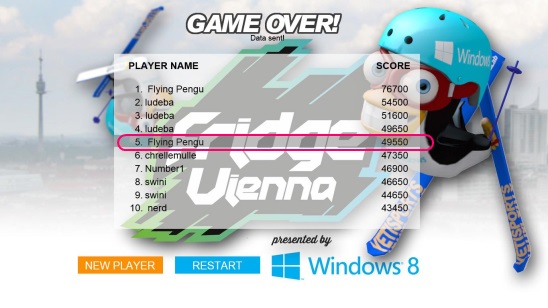 Pengu Fridge is a good game app. The fact that you’ll compete against the players around the world makes it fun and compelling. The gameplay is good with good graphics, simulations and sync between controls and actions in the game. All in all a good game app to play.

You might also like this another good Windows 8 free running game app, from the same publisher: Pengu Hurdles.