Wool Season, is a free Windows 8 game app. It’s a simple game app with a really good interactive game play. Well the game play of this game app is all about jumping on the falling wool, and trying to reach the highest height that you can go. The game is difficult but not impossible to play. And to help you with the scores, you’ll also get some bonuses in the game, that can really raise-up your scores in the game. It’s a very fun and interactive game app, that you can get in Windows 8 devices.

The app is supported in all Windows Devices. But the game is most fun while playing it in desktop PC. Because, it takes a lot of concentration in the game to play well in PC, which makes it fun. 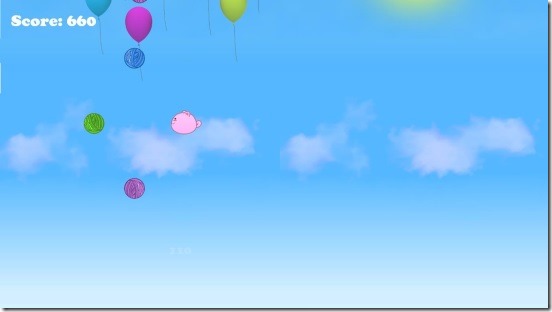 The game is very simple. You’ll play as the pink Kitty, who has to jump on the falling woolen balls. As you’ll start the game, you’ll get multiple falling woolen balls, and these balls will continue to fall until the game doesn’t end. You’ll start from the very base that is the ground, and then jump up in a quest to reach to the highest height. Simply left click once to take the first jump. And then all you have to do is move your mouse (cursor) left and right to coordinate with falling woolen balls. The kitty automatically follows your mouse movements. For each successful jump up, you get scored, and the score keeps getting added until you fall down. Once if you missed any woolen ball, and couldn’t reach to any other ball then it’s obvious that you’ll hit the ground, because gravity works everywhere. Once you hit the ground, the game ends that very moment. 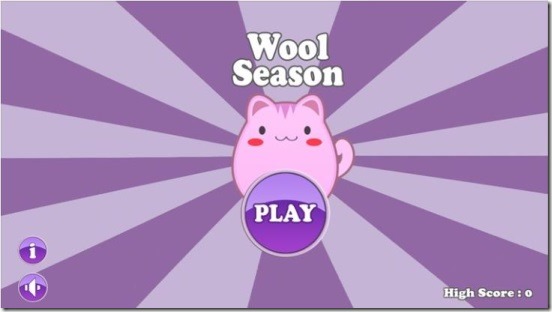 It’s the gameplay of this Windows 8 game app, that makes it fun and addictive. It’s really not that easy to properly coordinate with the falling wool, and it does take, a lot of concentration and good coordination between eyes and hands. The game requires your attention all the time. However to make the game more fun, the game also gives you bonuses in the form of 2X multiple woolen balls. They are the blinking woolen balls that randomly fall from the top along with other balls. Simply jump on them and get your score doubled. 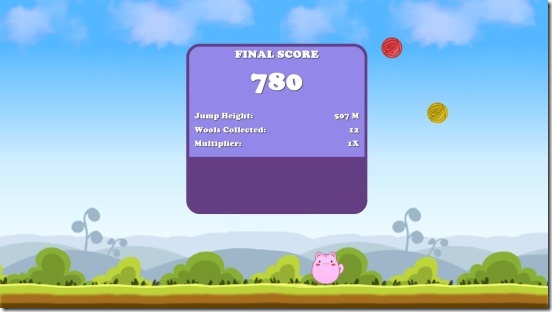 Try to reach the highest height possible by jumping over the woolen balls. The app saves your all time highest score and shows it to you after every game.

Wool Season, is a good Windows 8 game app. It’s fun, interesting and quite challenging. The simulation is pretty good, so are the gameplay and sounds. However, there’s a small bug in the game: the restart button is not visible after the game ends. But it is in there in the purple bar below the 1X multiplier. Besides that it’s all good app.