MiniCap also provides its graphical interface for capturing a particular object of an application. Moreover, it is also able to capture scrolling window. This will help you to take full-page screenshot, and not just the visible part. 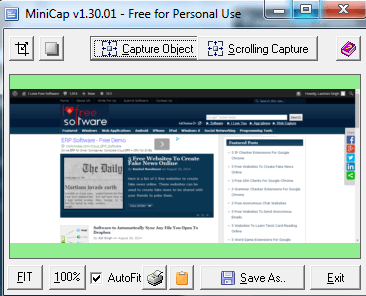 In above screenshot, you can see its graphical interface. On the other hand, command line usage is needed to capture required screenshot and preview screenshot in its interface.

How to Use This Free Screenshot Capture Tool?

Access its homepage with the help of link available at the end of this review. Download its setup file (less than 2 MB) and install it on your PC. Now you have to open command prompt window to take screenshot with desired command. Some of the important commands are:

Take screenshot of a running application:

If you want to capture any running window with this tool, then type the following command: “installation location of MiniCap application file” -save “screenshot destination location+screenshot name+screenshot extension” -captureappbyname “application name”.

After executing the command, it will capture interface of that particular application along with whatever content is opened with that application.

Note: Make sure the application is not minimized to Windows taskbar. Otherwise, it will fail to capture that application.

Similarly, you can use this command to take screenshot of a text file by automatically opening it with Notepad or Word.

This is a simple command which lets you capture full desktop screen. Command would be like: “installation location of MiniCap” -capturedesktop -save “screenshot destination location+name+Screenshot extension”.

Interface of this tool is helpful to capture full-page of any application or website, which is not possible with many similar tools. It automatically scroll downs the full-page and captures it. To use this option, Click on Scrolling Capture button on its interface. After this, it will let you select the window for taking screenshot. Once you are ready, use Ctrl+left mouse button. Immediately after this, a window will open where you have to choose ‘Begin a Scrolling Window capture‘ option. This will help to take full-page screenshot. 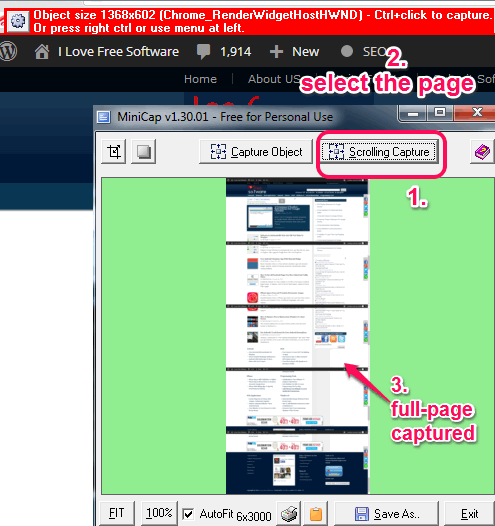 Captured screenshot will open on its interface. Now you can save your screenshot to required destination location. Screenshot can be saved as: gif, png, jpg, tif, bmp, tiff, pdf, etc. If you want, you can also crop screenshot before saving it to PC.

Another use of its interface is to capture a particular object (say toolbox) available in a particular application. You can use Capture Object button for this.

MiniCap brings two rare to find features that makes it unique and handy. You can mainly use it whenever you have to auto launch application for capturing screenshot and capture full-page of scrolling window.