The Football Playbook is a football tactics game that is available for free download on your PC. Plan the game and guide the ball from goalkeeper to striker.

Football (Soccer) is a famous sport game (I’m a fan of football game myself). In this PC Game you will be provided a snapshot of the game and you have to solve the tactical puzzle to make a goal. This game is available for Windows PC and the download size is just 10 MB. 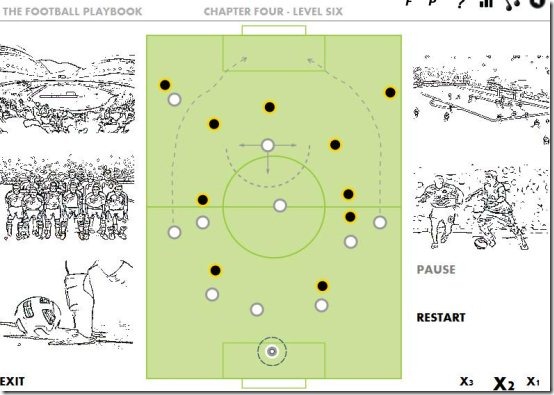 About This Football Tactics Game:

This football tactics game looks like a comic style game; but it isn’t as easy as it sounds. You have to plan the whole play like a football team manager. In this game you have to defend your team, kick the ball, divert the opposite team players, and make a goal.

This football tactics game has 42 levels to compete with the computer. There is a tutorial and demo game for practice. From chapter one you have to start playing from first level and complete it to unlock the next level. Whenever you win a lower level, the next level will be unlocked and so on. There are six levels in each chapter.

The whole game operates with mouse clicks only. Anybody would get confused on what to do if you are new to this game. There is no good description of gameplay in “How to play” section also. I spent a few minutes and tried playing a few levels and then finally became an expert. Below I have mentioned a few tips on how to play this game. 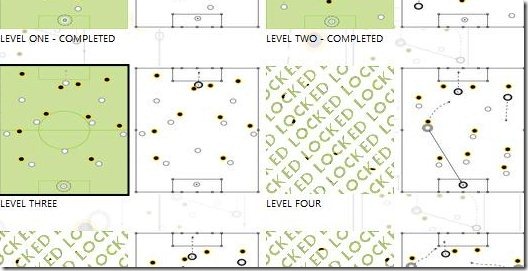 When you start a level, a photosnap of the players position will be shown in white background. Then you have to click the cross mark on the top right to start the game, then the whole back ground and the icons will transform into different colors as shown in below screenshot.

Unfortunately you can’t make your players move; they just stand still and only computer players move. Although there are some players who move.

The players who has a dotted arrow path along them move themselves when they get the ball. 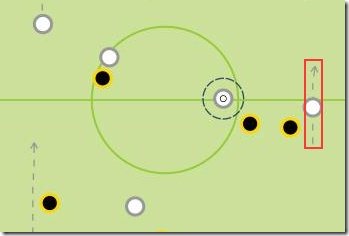 There are some players who need to be activated by a mouse click. Click on the cement colored circle to move them to that point. These players can be used to divert others or to handle the ball. 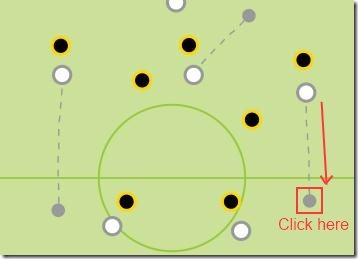 Here is a small video of the gameplay of The Football Playbook:

Only the center part is the football field and players in it. The rest of the screen shows the football fans expression or encouragement by the crowd when you hit a goal or your manager expressions etc. The sound effects are also related on how you play the game. Want to play a different puzzle game? Then try this Detective game.