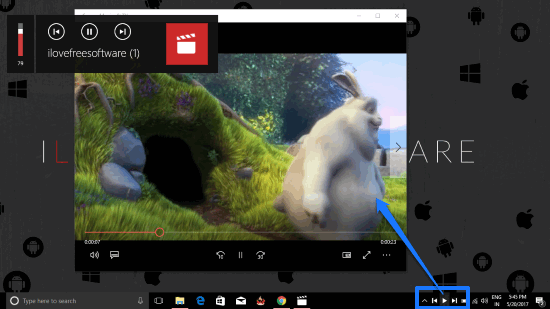 How to use Taskplay to control the media in the media players:

There is nothing much you have to do, just download it from the link at the end of this review and install it. After that, open it and it will add its media player controls to the Windows Taskbar, as shown in the screenshot below. If it didn’t add it to the Taskbar then you can find them in the System Tray and drag them to Taskbar.

Now, you can control media players from Taskplay controls in the Taskbar. There are 3 buttons: one to play/pause media and other two to play the next and previous media file in the playlist. If you are just playing a single media file then these two buttons can be used to move forward and backward of the media file being played.

You can also choose Taskplay to run at Windows startup. In order to automatically start it every time you reboot, right-click on its media control buttons and select Options. This will pop up a dialog box and you have to enable the “Start Taskplay with Windows”, as shown in the screenshot below. 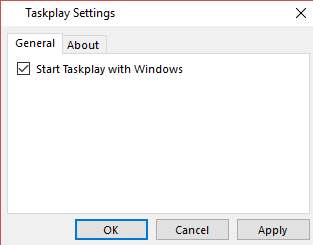 What I most liked about Taskplay is that it offers a new way to interact with media players as you can play and pause media files played in these players from anywhere using the Taskbar controls. There are media players that add their own media control buttons to the taskbar but Taskplay generalizes this idea and is compatible with most of the media players out there.

I will definitely recommend you to try Taskplay as it can easily control most of the media players and allows you to control the media playback in this software right from the Windows Taskbar. It would have been really great if it supported VLC media player as it is one of my favorite media players as I can also make VLC frameless.