This tutorial explains how to view system resource usage of modern apps in Windows 10. Just like its predecessor Windows 8, Windows 10 also fully supports the modern style (earlier known as metro style) apps. These modern apps include features such as the ability to run (and update) in the background, a minimal and consistent UI, and support for real-time updating live tiles.

However, these modern apps are essentially system programs that consume resources such as CPU, memory, and network bandwidth, just like any other application. With that being said, have you ever wondered, just how much of your system’s resources these modern apps utilize? If the answer is yes, then you’re in luck, as you can easily do so in Windows 10, via the system task manager. Intrigued? Let’s see how you can view system resource usage of modern apps in Windows 10.

How To View System Resource Usage Of Modern Apps In Windows 10?

Checking the system resource usage of all the modern style apps, installed under a particular user account is extremely easy in Windows 10. And all it takes is two clicks:

Step 1: To begin with, start up the Windows Task Manager. The simplest way to do this is to right click on the taskbar, and select Task Manager from the context menu that pops up (Alternatively, you can either search for the Task Manager using the search function, or use the Ctrl+Shift+Esc combination). 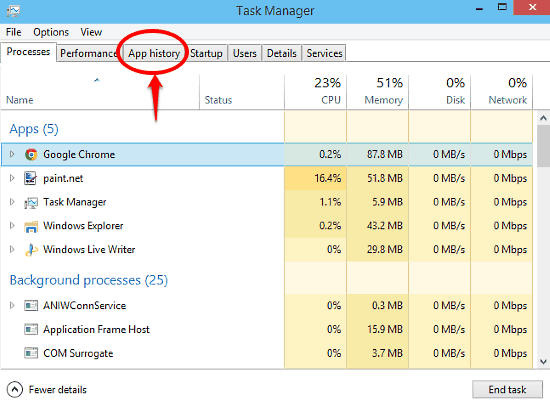 As illustrated above, the Windows 10 Task Manager features a tabbed UI, with each tab providing some specific type of system information. Now, Select the App history tab.

Step 2: And there you have it, folks! As soon as you click on the App history tab, you’ll see a detailed listing of all the modern apps installed under the active user account. The app history pane further has a columnar layout, with each column listing the usage for a specific system resource. For each app, you can view the CPU time, Network usage, Metered (or Capped) network usage, and Bandwidth consumption by Live Tile updates. 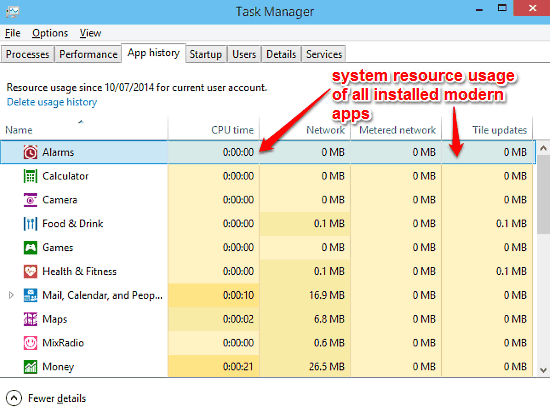 As illustrated above, the individual columns let you instantly check the individual resource usage of all the installed modern apps. If you want to clear off the history, you can easily do so via the Delete usage history option. Quite nice, right?

Also See: How To Copy File Or Folder Path To Windows 10 Clipboard?

The ability to view system resource usage of modern apps in Windows 10 is small but really handy feature. It provides you with a simple and efficient way of keeping tabs on the way the installed modern apps use critical system resources. Do give it a try, you’ll love it.