In the long timespan of its development, the Windows line of Operating Systems has had a lot of features added to it. Similarly, a lot of them have also gone the way of the dodo. But there are some core features that have made their way to into every single Windows version (with refinements, of course), including the freshest Windows 10. One such staple of Windows, is the Command Prompt.

The humble and unassuming Command Prompt is something that pretty much every computer user is familiar with. It lets you create/delete partitions, run disk checks, move around files/folders, and pretty much anything (provided you know how to do all that with textual commands). Basically, it’s the ultimate tool for the command line nerd. And in Windows 10, it’s more powerful than ever. And while the Command Prompt is extremely handy for doing things more efficiently, it can also be a bit dangerous in the wrong hands. Consequently, it’s imperative that only authorized users can access it.

Not an issue my friend, as Windows 10 easily lets you curb any and all access to Command Prompt. Stoked already? Jump over to the other side of the break to see how you can disable Command Prompt in Windows 10.

How To Disable Command Prompt In Windows 10?

Restricting access to Command Prompt in Windows 10 is a fairly simple affair, and requires nothing more than a little tinkering with the Group Policy settings. The following step by step tutorial explains how to get this done:

Step 1: Go to the Run prompt, type in gpedit.msc, and hit Enter to launch the Windows Group Policy Editor. Once there, use the left navigation pane and go to User Configuration > Administrative Templates > System. 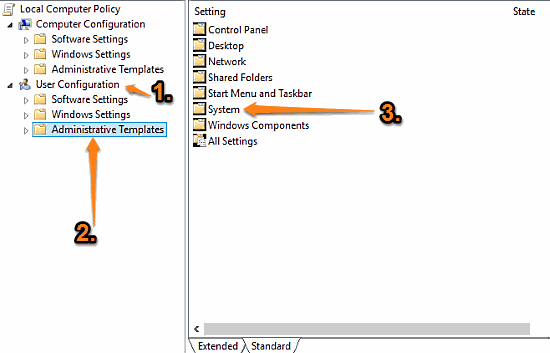 Step 2: The sub-settings related to System should now appear in the right pane. Scroll down to the setting that says Prevent access to the command prompt, right click on it, and select Edit from the context menu. Once the edit box pops up, change the value of the setting from Not Configured to Enabled. Here’s a screenshot: 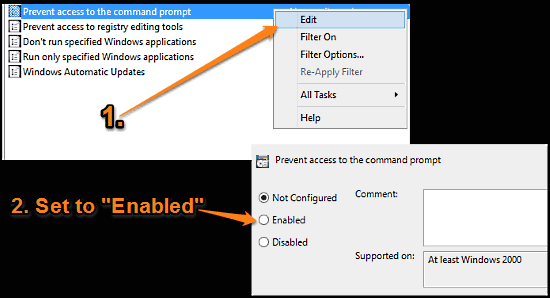 That’s it. Going forward, whenever a user accesses the Command Prompt, the application will display a message that the command prompt has been disabled by the administrator. Cool, isn’t it?

The Command Prompt is an extremely useful and versatile feature of Windows, and probably that’s a reason that it’s been an integral part (and will be, for the foreseeable part of the future) of the Windows family. However, it’s a powerful tool that must only be accessed by authorized users. And as you know now, disabling access to Command Prompt is incredibly simple. So try it out, and let me know your thoughts in the comments below.