Privatize is a really useful free website to send links privately by tweets. It lets you send any link privately to one (or more) twitter users, if you have mentioned them (or more specifically, their twitter handles) in the tweet. If anyone else clicks on those links, they wont’t be able to access it!

Privatize is really simple and easy to use, and all you need to have to use it is a valid Twitter account. Before making the link secure, Privatize automatically creates a short URL for it, thus making it easier to be shared. Only the users mentioned via their twitter handles with the privatized link are able to access it, whereas others are simply returned an authorization error message, informing that the link is not meant for them. Sounds interesting? Let’s find out more.

How To Use This Free Website To Send Links Privately By Tweets?

Using Privatize to secure your URLs and share them with others is fairly easy. As mentioned in the beginning of the article, all you need to have is a valid Twitter account (which should be fairly obvious, considering the sharing of the links is accomplished via tweets). Apart from that, no separate account signups, profiles, confirmation emails, or anything of that sort are needed. Here’s a little step by step tutorial, explaining how to share links privately by tweets: 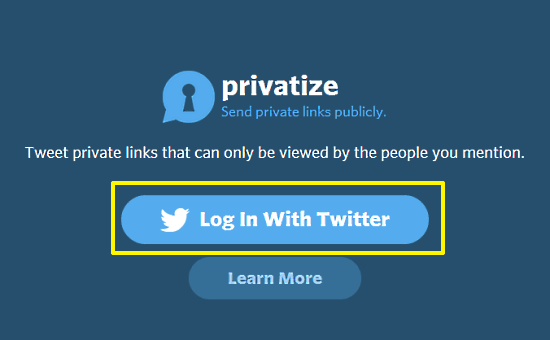 Step 2: As you might have guessed, the next step requires you to grant Privatize access to your Twitter account. To do so, simply enter your Twitter username and password, and you’re good to go. You’ll be now redirected to Privatize. The next screen asks you to specify the URL that you want to send securely, as well as the tweet that you want to send along with it. Note that you have to include the twitter handles of the users with whom you want to share the link, in the tweet. Here’s a screenshot: 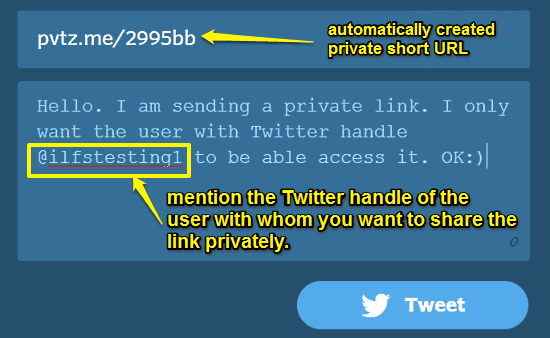 As illustrated by the above screenshot, the moment you specify URL that you want to share securely, Privatize automatically converts it into a  secure short URL. The Twitter handle of the person with whom you want to share the link also needs to be mentioned in the tweet.

Step 3: Once you’ve specified the link and composed the tweet, simply click the Tweet button. That’s it. Your privatized link (and its associated Tweet) is posted on your Twitter timeline. With this step, your part is done. Now, all that the other persons have to do to view this privatized secure URL is visit your timeline and click on it. Upon doing so, they will need to authenticate themselves via their Twitter account. If the users’ Twitter handles indeed match the ones mentioned in the Tweet, they’ll be taken straight to the webpage pointed to by the secure short URL. Otherwise, Privatize will return a simple authorization failure error message, as shown below:

That’s all there to it. That wasn’t hard now, was it?

Privatize is an amazing free website to send links privately by tweets. It’s simple, easy to use and works the way it’s supposed to. Best of all, it works with your existing Twitter account. Features like the ability to automatically create privatized short URLs, share them with multiple Twitter users are great, and make Privatize a really robust secure link sharing service. Do give it a try, you won’t be disappointed.