Fire Drill Rescue is a free Windows 8 rescue game app, where the only objective of the game is to rescue as many squirrels as you can. Well, the scenario of the game is, that city buildings have caught wild fire, and the poor squirrels are trapped inside the buildings. You are a part of Emergency Rescue team, and has trained all your life,for situation like this. Now, it’s time to put all the training into some use and save the squirrels by using the trampoline. The game is fun and is in 2D. All those who love helping out people, and have a big heart are going to love this fun game app. 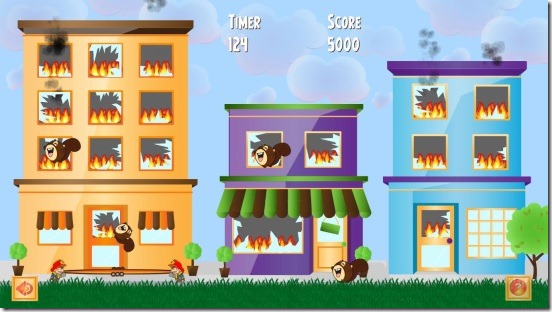 This is a fun casual game app for Windows 8. There’s nothing much in the game, still, it manages to keep player glued to the game. There’s no sudden twist and turns. But, the game’s difficulty does rises up, as the game advances. You’ll get a countdown time of 199 seconds, and this time is not like the real world time. The seconds in the game pass by pretty fast, lot faster than the seconds of real life. And, this is one of the reason, that makes the game a bit challenging. 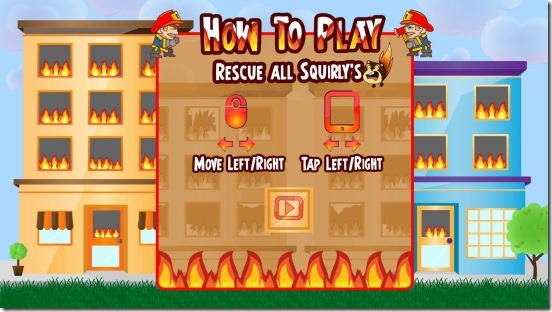 The game controls are very easy, simply move the mouse, or tap left or right (for touch devices) to move trampoline. The game has only one stage, and since it’s in 2D, so the game doesn’t puts too much load on your Windows 8 devices. The simulations are also good. Actually, it’s too smooth, making it a bit hard to control the trampoline. But that’s a good thing for game’s difficulty. Also, the more your score in the game goes, the more number of squirrels jump from different windows, to make it harder for you to be at all the places. 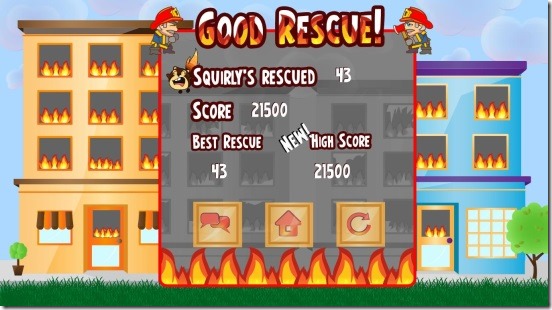 Simply, download it and play it. The more squirrels you save in those quick 199 seconds, the more scores you’ll get.

Fire Drill Rescue is a good Windows 8 rescue game app. It’s a very simple, but fun casual game app for Windows 8 devices. The only thing that it needs now is more number of levels. Other than that, it’s an all good game app.