Follow Me, is a free Windows 8 memory game app, and does tests how good is your memory; that is How much you can remember. This little Windows 8 memory game app is based on the legendary memory game called Simon, which became very popular in 1970s and 80s. And brings back the same old game in your Windows 8 devices. The game is available for all the Windows 8 touch based as well as non touch devices. Just like the original; this Windows 8 memory game app also has a simple square divided into 4 different colored parts (buttons) Red, Blue, Green, and Yellow. In every level, one (or more) of these colored parts of square lights up with it’s respective sound with a pattern. All you have to do is repeat the same pattern. If you manage to repeat the exact pattern, then you’ll level up, and you’ll get another more complicated pattern. The game continues like this till 50 levels, until you press a wrong colored part. 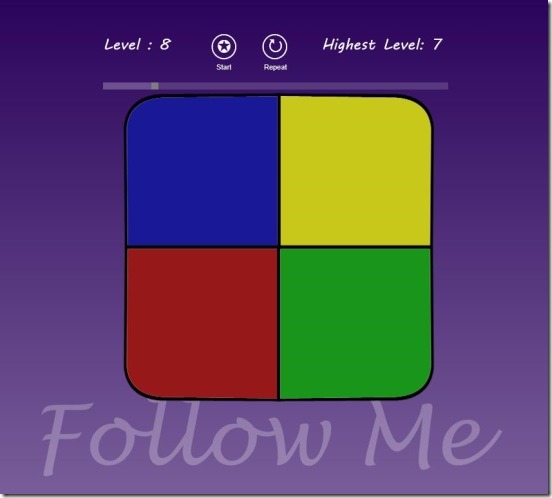 This little Windows 8 memory game app, certainly is a very good game app. It’s simple, and has no complicated rules or sudden twists. Making it easy for everyone to play the game. The game is equally good for the kids as well as the adults. It’s a great medium to sharpen your memory. The game has nothing much, but just a simple square with four different colored buttons, and two buttons at the top for starting a game and repeating the last played pattern. If you want to really challenge yourself, then try playing without using the Repeat button. The repeat button is more like a help. 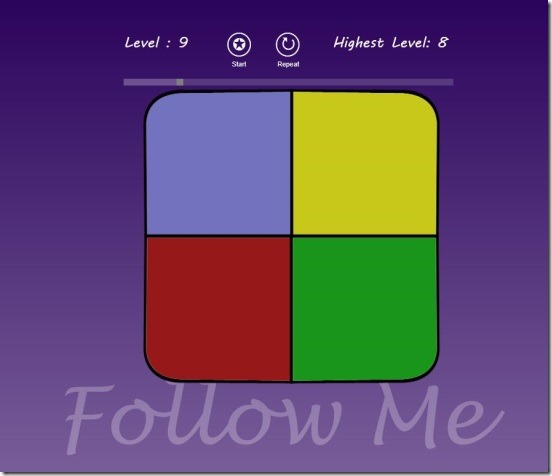 Like I mentioned above, the game has a total of 50 levels to complete. The game is pretty challenging, and does makes it a bit hard for you to remember the pattern. But this is the fact that makes this game app fun. In each level the buttons of square light up with their own sounds, in a certain pattern. And you have to repeat the same pattern again by clicking on the buttons in the same pattern. If you managed to repeat the exact same, then you’ll move to next higher level, and get a bit more complicated pattern. And the game difficulty increases as you advance in the game.

However if you, clicked the wrong button, you get an ‘aaaaaa’ sound, telling you that it’s a wrong button, and you have to start from the very beginning again, that is from level 1. The app saves the best performance that is highest level you reached, and keeps showing you at the top of screen; which constantly reminds you of the target to achieve. That’s pretty much it about this Windows 8 memory game app.

Some key features of this Windows 8 memory game app: