SyncDroid is a free Android Backup application that lets you backup Android phone data to PC, SD Card, and to your Dropbox account. Not only you can create your Android phone backup, but can also restore it whenever needed. This tool is quite useful to secure all your Android data. Android SMS, contacts, call logs, audio video files, camera photos, SD card photos, and browser bookmarks can be backed up and restored with just few mouse clicks. 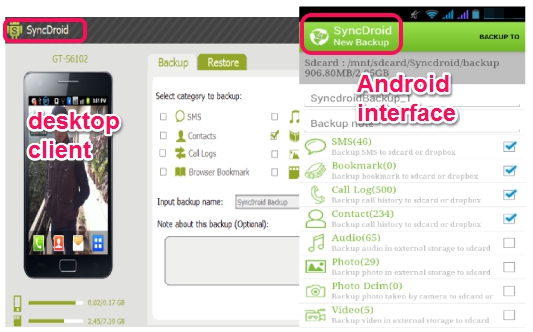 See the above screenshot that shows its PC client interface and Android interface with all options for backup.

How To Backup Android Phone Data To PC, Dropbox, or SD Card With SyncDroid?

There are two different ways to create backup and restore backup items with SyncDroid. Using Android app and using PC client with Android app. Have a look at both ways:

To backup Android contacts, SMS, media files, camera/SD card photos, etc. on PC, simply install desktop client of SyncDroid. Its download link is present at the end of this review. After installation, open its interface, and connect your Android phone with data cable. Make sure that USB debugging mode is enabled on your phone. In most of the Android phones, it is located under Settings-> Developer options-> USB debugging.

After connecting phone with PC, SyncDroid will automatically detect your phone and install needed driver on PC and Android app on your phone, so that it can connect with your phone. 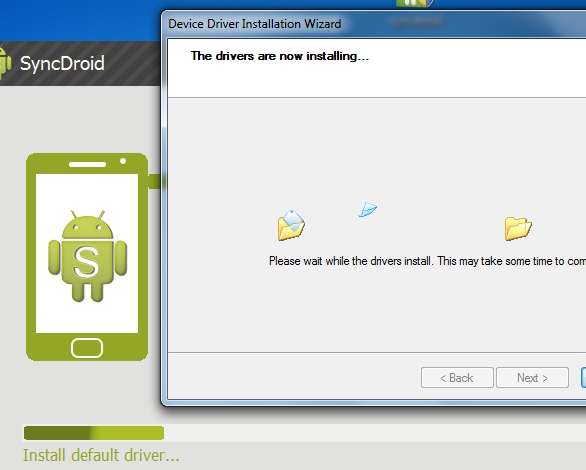 Just after this, its interface will open up that provides two tabs: Backup and Restore tab.

Backup tab contains all the categories that can be backed up from your phone to your PC. Just select required categories, enter any name for that backup, backup note (optional), and start the backup process using Backup button. Immediately after this, it will start fetching all the selected items from your phone and create a backup folder to default destination location (My Documents/SyncDroid/Backup). 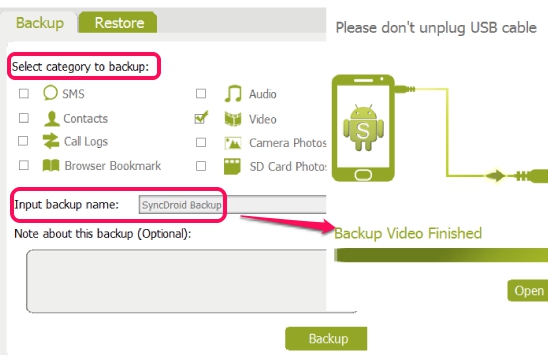 Now you don’t have to worry even if your Android items are deleted accidentally, as you can restore them back using SyncDroid. You need to follow a similar process for restore. Run SyncDroid, connect your phone, access Restore tab, choose your backup package, and start the restore process. 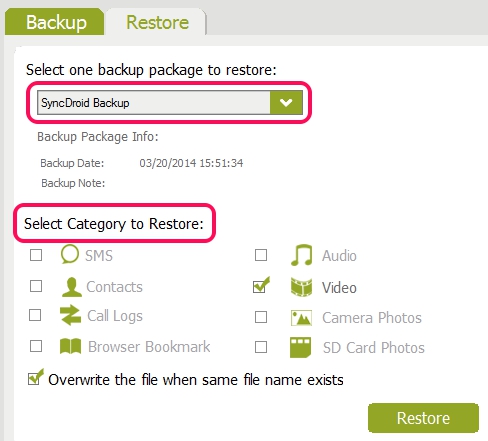 In the same way, you can create multiple backups and can restore any backup package to your Android phone using its PC client.

Backup Android Phone Data To SD Card or To Your Dropbox Account:

This process requires SyncDroid Android app installed on your phone, which you find from Google Play Store or from homepage of SyncDroid. Install it and run it on your Android device. And to create a new backup, access tools option, and use New Backup icon. This will open list of all categories that can be backed up either to SD card or to your Dropbox account (see the screenshot below).

You can select any category or can tap and hold on a category to move inside to that category and select items that you want backup. 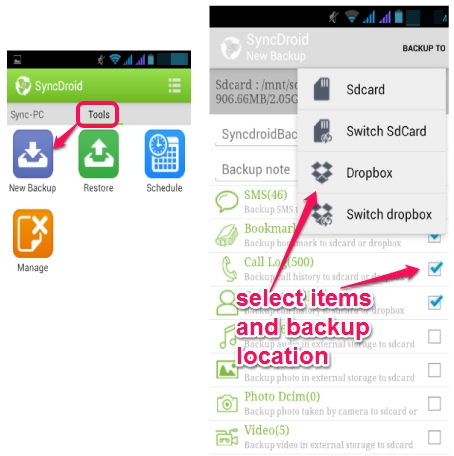 Once you have selected categories and items for backup, select SD card if you need to backup there, or else use Dropbox option to backup items to Dropbox account. However, on your Dropbox account, you can only create backup for SMS, Call Logs, Bookmark, and Contacts. For audio video files, images, you can create backup only in SD card of your Android phone. 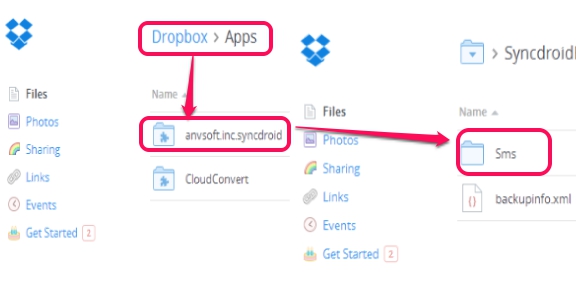 Other Features Present In This Android Data Backup Application:

Some more features are also present that you will find in its Android app. These are:

SyncDroid is handy for all those users who want to keep a secure backup of their Android items either on PC or on phone’s memory card. It works absolutely fine, except scheduling feature. Still it is quite useful to create quick backup of Android phone quickly.