RokQ is a free and simple mp3 player for Windows that lets you play mp3 soundtracks by adding upto 5 songs in queue. This simple mp3 player supports webcam also. Although there is no as such use of this function but it captures a picture when a queued song starts. It might be an interesting thing just for fun. RokQ can be useful for a small party as people can select & add their songs in queue and it will play them one by one. Once all the queued songs will be played, then it will play other songs randomly.

RokQ supports drag n drop feature, thus you can drop multiple mp3 files on its interface. It lets you sort out added songs based on genres such as rock, metal, folk, jazz, classic etc. It’s a very simple player and doesn’t provide a lot of options. But few hotkeys are available to use this player more easily.

Interface of this player is quite good and colorful as visible in below screenshot. Here you will able to see all the songs added by you in tile form and can double-click on any song to add it in queue. When the next queued song will be played, it will capture a photo just like the below screenshot. 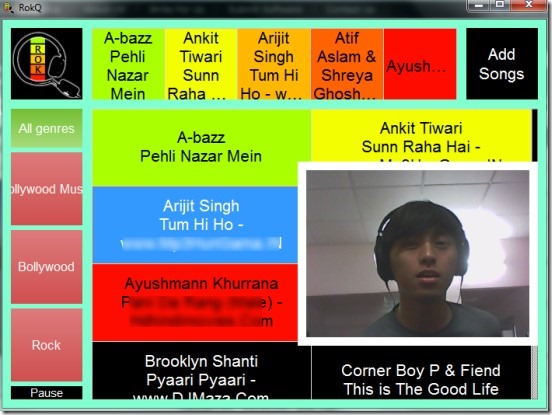 How To Use RokQ To Play MP3 Files?

RokQ is only 10.1 mb in size and you can download it using the link present at the end of this article. After this you can install it to play mp3 files. Everytime when you will run RokQ, it will ask you whether you want to use webcam or not. Allow or deny permission according to your own requirement. After this, its main window will open up where you can drag n drop mp3 files or a whole folder. If you want, you can use Add Songs button to add a folder. 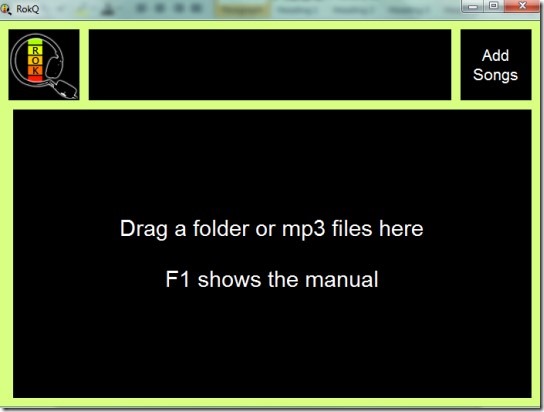 After adding songs, you can double-click or enter on desired songs to add them in queue. Queued songs will be displayed on top part on its interface with different colors (such as green color for current playing song).

Here shortcoming of this player is that no playback controls are available. Only a pause button  is present. Moreover, you cannot change/delete queued songs neither you can play any random song. It will play queued songs on the basis of first come first serve.

There are few hotkeys available for this simple mp3 player. Such as:

This player is capable to play only mp3 sound tracks. So if you are looking for some audio player that can play multiple audio format files, then you can try s8Tunes, BZR Player, and PlayIt Live.

Some Key Features Available In RokQ Are

RokQ is one of the basic and simple mp3 player that helps you to add mp3 sound tracks, put them in queue, and play one by one. There are no playback controls present neither any option available to delete queued songs and play songs randomly. So if you want some more feature rich and simple mp3 players, then you can try Dragon MP3 Player, Black Cat Mp3 Player, Noch ein MP3 Player, and Random Music Player. But RokQ is useful if you want a simple and kind of party jukebox that can add songs in queue to play.