s8Tunes is a free audio player that lets you easily play or edit music on your system. It’s a handy and lightweight app that supports MP3, WMA, AAC, M4A, and WAV file formats and allows you to listen to your favorite songs anytime. Apart from that, s8Tunes comes with tempo, cent, and key controls and lets you easily edit playback speed or pitch of the songs. The edited songs can be saved in WAV (by default) or MP3 (by pasting an additional file into s8Tunes folder) formats.

There are many free audio players available out there, but s8Tunes is a slightly different player since it enables you to modify the original song and adjust its tempo and pitch. It therefore, allows you to make changes to a song and easily alter its playback settings.

s8Tunes is available as a freeware and can be downloaded easily using the link given at the end of this article. It’s a lightweight software (688 KB) and won’t take much time to download. Once the download finishes, you can install this free audio player in your system using the installation wizard and launch it to play audio files anytime.

s8Tunes provides drag and drop support and lets you add multiple audio files together to the player’s interface. After adding the files, you can play the desired song just by double-clicking on it. You can see a playing head on top of the program window showing the progress of the song being played. Below that bar, there are few playback controls listed which you can use to go to the next or previous song in the list, change the playback volume, or search for any particular song.

As I have mentioned above, the program also allows you to change the tempo or pitch of any desired song from the list. This you can do by using the Tempo, Cent, or Key controls listed at the bottom of the program window. These are basically slider controls that easily lets you modify the tempo and pitch settings of the song and test them in real time. Once you are done, you can click on the “WAV” button listed at the top among other playback controls, to save the modified audio file to WAV format. The output file will be saved in the s8Tunes folder and you can easily find it there anytime you want. 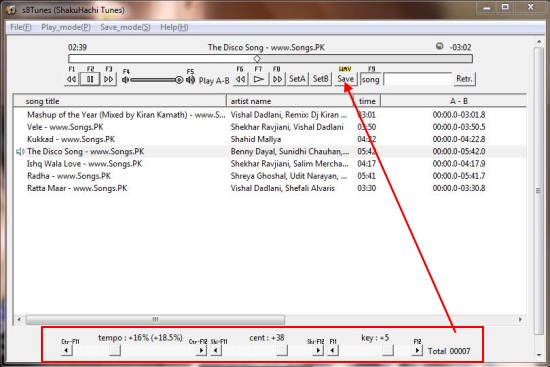 s8Tunes is a nice free audio player that supports many popular audio file formats and allows you to adjust tempo and pitch settings of the audio files. However, the interface of the app is quite basic. It would have been better if it had provided some nice theme options and pretty visualizations. Download free and give it a try.