The monotony of everyday life is quite tedious and a little bit of fun never hurt anybody. This is where Jogobox (beta) comes in. It is a program that allows users to play a multitude of free games from one place. The user chooses any game they fancy that is available and then the program downloads the games which the users can play. 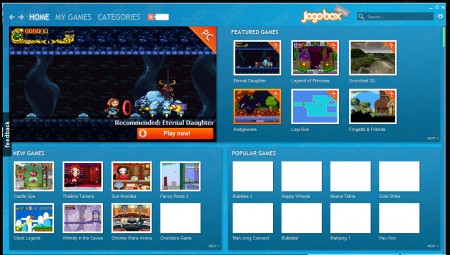 Features of this free games program:

The Jogobox program is quite small; just over 300 kb in size. Once that is downloaded, it connects to the internet and downloads other resources required for the installation. Complete installation time is under 5 minutes. Once the installation is done, the pleasing interface shows a number of games available to play. When the user chooses a game, the program downloads that particular game from its servers for the user to play. 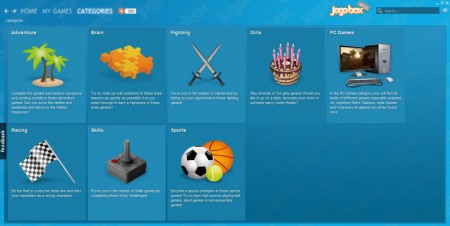 The interface is quite attractive and would appeal mostly to kids. But those among us who want to get a break can also try this out. The working is where the program falls down. The program, though still in its beta stage, is prone to crashing quite often. Even when tested on quite a reliable system, the program crashed a number of times. This will hopefully be rectified in the release version. Downloading of few games can also pose to be a hindrance to smooth working. Some of the most favored games could have been included as part of the installation package, thus reducing the need to connect to the internet. Once downloaded, the games run quite well. The number of games is quite large and users won’t be found complaining for lack of choice.

You can also check out Round Games and MiniClip for playing free online games.

Jogobox is a program that tries to break the mundane nature of everyday life rather than try to make it more organized and simple. This is one of the key points of this program. It has a few small faults which should hopefully be rectified soon enough. The program can be recommended whole-heartedly.