This article covers how to uninstall Windows 10 provisioned apps permanently for new users. That simply means whenever a new user is created, the unwanted apps won’t be installed for that particular user, which will also save some disk space. You will be able to decide whether you want to remove all or selected provisioned apps for new users. For this purpose, I am using a free software here, which is named “Windows 10 Privacy Utility“.

You must already know that when we create a new user on Windows 10 (local or with Microsoft account), Windows 10 automatically installs a lot of apps which it thinks are important for a user, and those apps are known as provisioned apps. Such provisioned apps include Weather app, People, Microsoft Screen Sketch, Skype, OneNote, Connect, Photos, Maps, Alarms, Camera, Calculator, and more. So, instead of installing all those apps automatically, you can remove unnecessary apps and those apps won’t be installed for any new user. The new users can manually install such apps from Microsoft Store whenever they want. 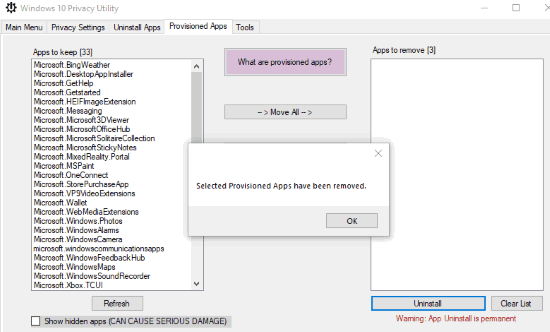 In the screenshot above, you can see that I removed a few Windows 10 provisioned apps.

Note: This software is built for Windows 10 version 1809, but it is also helpful in the version 1903. Also, this software provides many other features like disable telemetry, uninstall OneDrive, disable Cortana, Microsoft Edge, reset Start menu tiles to default, etc. But, this article is focused on this unique feature only.

How to Uninstall Windows 10 Provisioned Apps Permanently for New Users?

Step 1: Download the portable application file (EXE) of this software using the link added at the end of this review.

Step 2: Launch the software UI and go to Provisioned Apps tab. It will load all those apps on the left side. You can also enable “Show hidden apps” option if you want to remove those apps too. Step 3: When the list is visible, you can move all those apps to the right part or move apps of your choice. After that, use “Uninstall” button, and confirm your action.

Since this action is permanent, add only those apps to the uninstallation list which you are sure enough.

The software will take some time and then permanently remove all those apps. Now, when you will create a new user, you will notice that those apps are not installed automatically. But, you can install them from Microsoft Store.

This is a straightforward option to uninstall Windows 10 provisioned apps permanently for new users. It will be helpful to a lot of users. It should be user’s choice which apps he/she wants automatically while creating a new user. And this software is pretty good for that purpose.