BBM (BlackBerry Messenger) is one of the oldest instant messengers for smartphones and it has stood up to the test of time. During its such a long journey, BBM has went through a lot of changes, with new features being added to it from time to time. In the continuation to this process, BBM is all set to get two new features in its upcoming release. According to Jeff Gadway, Head of Product and Marketing, BBM, these two new features will help BBM users have more privacy and control over their BBM chats. 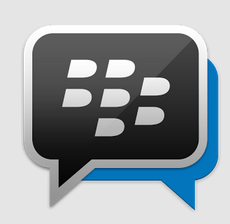 The new features will be released for BBM on iPhone, Android, and BlackBerry 10.

Let’s take a look at both of these features in detail.

How to Send Timed Messages in BBM:

The first feature I will talk about is Timed Messages. The self-destructible messages are getting really popular now-a-days as they give you an extra layer of protection and lets you maintain your privacy to a greater extent. Now, this feature is also coming to your BBM. This feature lets you send photos or text messages with self-destructible timer, let’s see how.

Step 1: Choose the photo or text message which you want to send as Timed Message. 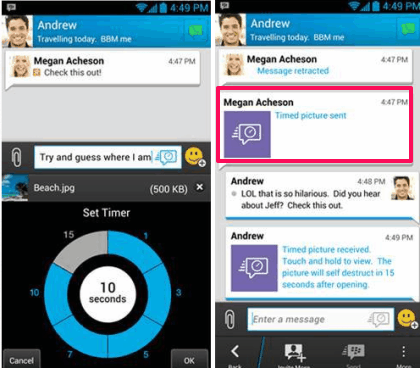 How to Use Recall Sent Message in BBM:

The next upcoming feature in BBM is Message Retraction. This feature lets you retract any message from BBM chat at any point of time. This feature can prove to be really helpful when you have sent a message to a wrong person. For example, you might have sent message having some confidential details about your client to your friend. In that case, you can use this option to retract the message.

Step 1: Open the conversation from which you want to retract the message(s).

Step 2: Tap and hold on the message you want to retract.

Step 3: You will get a right sidebar with Message Retraction feature. Tap on it and selected message will be retracted.

This feature removes the selected message from both the sender and receiver’s BBM chat. According to the official statement of BlackBerry, this feature will remove the message only from the BBM chat. It has nothing to do with cases in which the receiver might have already read the text or captured the screenshot of the message.

As for the release date for these two features, BlackBerry hasn’t mentioned any specific date except for the two words “Coming Soon.”

So till the time these features gets released for BBM across iPhone, Android, and BlackBerry 10, you can take a sneak peak into them by watching this video provided by BlackBerry.